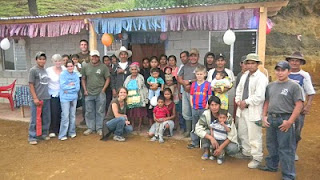 We met Candelario over a year ago. Romulo had recommended we visit his family as a potential candidate for a new home. When we arrived, he wasn't home, but his wife and daughter-in-law's were there.

It was a great visit. His wife was so sweet, and his daughter-in-laws had a similar sweet way about them. His wife told me she thought Candelario was out drinking. A little embarassed, she looked at the ground as she told me.

Since then, we have slowly developed a friendship with Candelario and his family. He is an alcoholic, and he admits it. He knows it is a problem. We intentionally talk openly with him about it (unusual in this culture), and confess our own struggles in an attempt to let him know that we love him all the same, and that God's grace is sufficient.

On Christmas Eve night, 2009, we showed up at Candelario's house with food baskets. The Moreau family was visiting us, and it was something that God had put on Paul's heart to do. We arrived with the food only to find out that they had NOTHING TO EAT on Christmas Eve or on Christmas Day. Candelario's sons (young men) cried as they realized that God knew their hunger, and He had sent us to bring them something to eat.

Finally, in February of 2010 we received sponsors to build Candelario a new home, complete with a bathroom.

One of the challenges was that they have 8 children, 7 of which are adults who have their own families. So 19 people (Candelario, his wife, 6 of their kids with their spouses, and 6 grandkids) all sleep together - packed into a giant tin shack. One of our standard 12x12 Love Project homes would not be enough. So God blessed us with 3 different sponsors to build a home twice the size of our normal houses!

When we delivered the news the family was ecstatic. Candelario was a few drinks into his evening when we arrived, but i honestly think the news sobered him up! They cried and celebrated as we shared the plan to build a house big enough for all of them.

Over the months that followed, genuine friendships developed. Candelario is doing better, and he regularly initiates the conversation about his drinking and how he is improving. The conversation always seems to find a way back to the grace of God... to the cross of Jesus.

The key ceremony was a sweet moment. Candelario emotionally shared that this home is "beyond all of my dreams." He said that he had honestly dreamt about having a block home with doors and windows, that he could pass down to his children, but that it was always just a dream with no possibility of becoming true.

I asked Romulo (the 12x12 Construction Foreman) to give Candelario the keys to his new home. Fighting back tears of his own, Romulo said to his friend since elementary school, "with these keys, your dreams have come true."

I believe Candelario and his family are learning about Jesus. I believe God is using the 12x12 Love Project and it's supporters to open doors of true friendship and discipleship. He is using this ministry as an tool to make known his grace and love.

for lots of pics of the construction process and key ceremony, CLICK HERE
Posted by brock at 7:50 PM