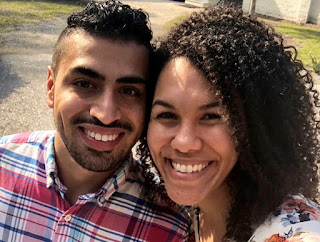 i've shared a little bit about the abushaib's before.

how they are the perfect fit for bvsa-west africa...

how oby is a muslim background believer, who understands "losing everything" and gaining Christ...

how monique has had a heart for missions and a ministry call on her life from a young age...

how oby is an avid soccer player and has already been working on his coaching certificate...

how monique is already fluent in french....

but have i mentioned that it took them all of one week to commit to pick-up and move to africa?

now i have to admit - that seemed too fast even for me!

back in early march, over a baleada at the honduran food truck, my friend carl casually told me about the abushaib's.  "you should meet some friends of ours.  they've talked about missions, specifically africa.  he's a christian that came out of islam.  and she speaks french.  and he's a huge soccer guy."

seriously?  dude! and you are just now thinking of this?  haha...

we met for dinner at carl and danae's house 3 days later, on a friday.  it was a nice dinner, just getting to know one another.  afterwards, we agreed to pray and get together again in a week.

the following friday, they came to our house... and told us they were "IN".  they said God had spoken, and they were certain.

i was beyond skeptical.  but they began sharing unfathomable stories of how God had spoken to them.  even then, i remember saying at one point, "guys, this is crazy - we haven't even told you about the ministry!?"

but the stories they shared were amazing.  miraculous, even.  and here we are - four months later - still fully convinced, and preparing to move!

in addition to their big faith, the abushaib's are simply a joy to be with.  their love for Christ, and for people, is exhilarating to be around.  they bring energy and cheer wherever they go.  i've had conversations with so many people who, after spending time with the them, say the same thing: "whoa, there is something special about them!".

of course, we know what that special thing is - Jesus!  they've surrendered their lives to Him and have chosen to follow Him with ALL that they are.

and now, in their mid-twenties, they are "leaving it all" to take the love of Jesus to the nations.

but their calling doesn't come without sacrifice. monique has a unique medical condition that has caused problems for years.  still not clearly diagnosed, she is believing that God will heal her when her feet touch african soil!  will you pray with us for this miracle?

whether it's God's will to heal monique or not, they have no doubts that He has called them to join us in west africa...  and in doing so, bring the good news of the gospel to an unreached people group.

the abushaib's will be training with us through the rest of the year - including stretches in guatemala and honduras - and then moving with us to senegal in early 2020!  please join us in welcoming oby and monique to the Rhino Family!