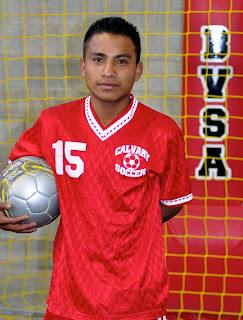 alex has been with us since day one.  been through a lot with this kid in the last couple years. he is 16 years old and super handsome.  we nicknamed him "pastor" because of how he prays - deep, sincere, and looooong prayers.

but we've had plenty of challenges with alex as well.  i've described him many times as a kid at a crossroad, who could choose one way or the other.

recently alex stole a cell phone from a pair of jeans that was sitting next to the team bench during an away game.  he was on the bench at the time while the game was in progress.

the owner of the jeans and phone contacted us the next day to say that he suspected his phone was stolen during the game.  he asked if we could question the boys, so we did.

long story short, we learned it was alex.  after being called out on it, alex did confess and admit what he did.

we were discouraged.  ironically, we had just finished a 2 week study on integrity.  the study went through 3 points to being a man of integrity:

needless to say, alex's choice lacked integrity on all 3 points.

after all that, i had a personal conversation with alex where i told him that i love him but that i am disappointed.  i told him that i can no longer trust him.  i looked into his eyes and said "alex, i do not trust you, my wife cannot trust you.  you have proven time and time again that you will steal from people.  that means you will steal from me, from the academy, from my home.  i love you, but i no longer trust you."

i thought it was an appropriate conversation for a 16 year old.  he was pretty stone faced, and that was that.  mynor and i were left discouraged.  you cant help but wonder "are they just not getting it?  are we wasting our time?"

2 days later we held a going away party at the academy for the widener family.  after the party, alex asked me if i would talk to him in private.  with tears in his eyes, he said "brock, i just want to say thank you."  i asked "for what?"  "for being honest with me. no one has ever spoken to me like that before.  i want you to be able to trust me.  i want to have integrity.  i don't know why i took that phone, and i am sorry.  i want to be a man of integrity."

it was a special moment!!  small steps.  small encouragements.  one thing i have learned as a parent is that your kids can't learn unless they make mistakes.  they can "know" what's right, but its when they mess up that everything they have learned starts to make sense.

i have high hopes for alex.  God has big plans for him.  i pray for him, that the next time he is tempted to steal, lie, etc...  that he hears the whisper of the holy spirit and makes a decision of integrity.
Posted by brock at 12:39 AM

Encouraged to hear how that story ended :)