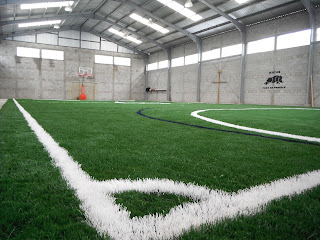 years ago, i realized that blessings often come in the form of challenges, suffering, purging, and giving things up.  so i stopped calling material stuff that makes life easier "blessings".  so many times, i think we end up realizing that these "blessings" are so often just the opposite!

however....  we have received a couple material blessings lately that i want to share.

first, we had a husband/wife visiting us for a few days, and during their visit they kept seeing the boys get injured on the concrete field we have in the gymnasium.  oscar cut his head wide open, and a few others took hard falls.  (a normal thing here!)  then the same couple went with us to watch the Rhinos play in guatemala city - at a complex where the fields are made of synthetic grass.

after returning home, they could not stop thinking about the boys.  after praying about it together, they felt led to donate a synthetic grass project for the boy's academy gym!  a couple months later, the project was completed and today the boys are enjoying their new field!

secondly, we have had a recent run of car trouble.  our sweet little 97 4-runner has been great to us for 3 years ever since we bought it, but lately its been one thing after another.  every time we seem to get it fixed, something else fails.

i was sharing about it with somebody recently, and shared that my biggest concern was that, because of the boy's academy schedule, kerrie drives alone 2-3 times per week to pick up the kids from school.  her being broken down on the side of the road in guatemala all by herself would not be a good thing.

anyway, it was one of several comments after being asked "how can we pray for you guys?".  but similar to the grass field, the guy began praying about it with his wife.  they soon contacted us and said they had been wanting to help our family out in a tangible way, and that they believed God wanted them to buy us an upgraded car!

so after a few weeks of shopping around with Mynor...  we were able to purchase a 2007 hyundai SUV!  its a perfect car for where we live in the beautiful Buena Vista mountains - a stick shift, 4x4, turbo-diesel with a 4 cyl engine.  we feel spoiled, but i have to say it is a relief to feel a little safer on the road.

God knows our every need.  he is faithful.  like cesar always says, we must praise Him always, during the good and the bad, because he is the same yesterday, today, and tomorrow.

so i dont want to forget to praise him, thank him, and thank those that he used to help us with these 2 wonderful "blessings"!!  THANK YOU!!!!!
Posted by brock at 9:17 AM