a big lesson from a wee little man 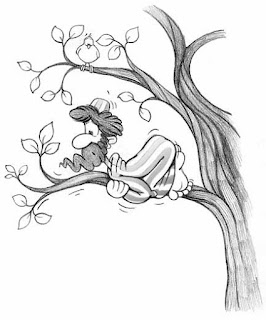 funny how i still think of certain bible stories as "kids stories"...  and when i teach them to kids, they end up teaching me something real and applicable to myself.  if we're not careful, we can let the fun bible songs rob us of something deeper - making us think that these stories are "cute" instead of amazing, real, and profound.

if you grew up in church, i bet you just finished the whole song.

during chapel time at the boy's academy, we've been teaching on the topics of honesty and apology (out of necessity!).  God led me to the story of zacchaeus, so we've been digging into it.  zaccheus gave us an incredible model on how to apologize.  do you remember the story?

he was a thief who overcharged taxes and pocketed the overage.  (yes, he was also a tiny man who climbed up a tree to see Jesus...  but that is so far from the point!)  when Jesus visited his house, zacchaeus became ashamed of who he was and the things he had done.  so he apologized and confessed.  but following the words that left his mouth, were actions.

not only did he confess with words, but he repaid each person 4x what he stolen from them.

a sincere apology is great.  a confession of sin is great.  but what follows?

zacchaeus showed us that genuine repentance is followed by actions.  it is the actions that prove the sincerity.  similarly, james taught us (in james ch. 2) that faith, without action, is dead.

i love how jesus responds to zacchaeus.  "today, salvation has come to your house."

was it his beliefs or his works that saved him?

it seems to me that it was the combination of the two - that one without the other doesn't cut it.

similarly, an apology or confession, followed by nothing, is of little value.  if we're sorry, our actions show that we're sorry.  and if we confess, our actions that follow will show if we mean it.