an incredible day with wilmer, and for BV 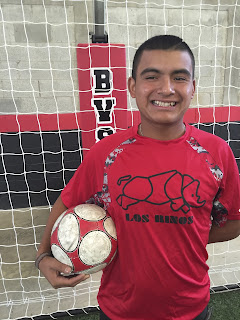 this is a special young man.

from the time we met him around 6-7 years ago, we knew wilmer was different.  a unique soft heart in a village where there are few.  teachable and moldable from the start.  later, he began sending me texts, expressing his heart, sharing what he was learning in devotions, and how God was speaking into his life.

in april of last year, he accepted christ and was baptized.  not long after that, his faith was tested when he risked his own life when he saved a local girl from likely being raped.

from that point up until the present day, his walk with Christ has been steadily growing.

together with friends from savannah christian church (who have been in prayer for this visit for more than a year), along with my family and the leiva family, we witnessed the unequivocal power of the holy spirit.  God is raising this young man up, preparing him to lead BV into a new era.  it is clear that God is calling wilmer to a unique and special calling.

as men, mynor and i work tirelessly at bvsa to break generational chains that exist in the village.  but, we ourselves are not from BV.  we are not one of them.  they are not our people.  since the academy began, our goal has been to build up young men - locals - that can see the vision through.

through an intense and spirit-filled morning in prayer, an anointing of sorts took place.  battles against the work of satan took place.  literal demon intrusion took place.  bold confession for the sins of an entire people group took place.  and liberation happened.

wilmer stood up in front of a crowd of witnesses and took the generational sins of his village and put them on his own shoulders - begging forgiveness and calling on the power of Jesus to redeem the brokenness.  i have witnessed powerful movements of the holy spirit before, and i knew i was in that place again.

as forces of evil gripped his body and attempted to inject fear, the power of the holy spirit through 20 or so of his followers came alive.  wilmer eventually rebuked the attempts of satan and after a tough fight, he was freed.  he explained a sudden "fire" that came over him as he smiled - a wonderful smile - and raised his hands to the heavens.

in true warrior fashion, he said boldy:  "i'm ready.  i will die for this.  if i die sharing the gospel of jesus, so be it.  it's worth dying for."

he left us all inspired.  that's the kind of leader that soldiers follow into battle!

after the dust had settled - the confessions, enemy attacks, deliverance, filling of the holy spirit, and proclamations - everyone present felt the magnitude of what had happened.  again, an amazing moment to be a part of.

wilmer's battle is just beginning.  as he works to reverse generations of bondage that have plagued his village, attacks will come at him.  he will be tested, challenged, confronted, and hated.

please join us in praying over wilmer's life and his calling.  pray the ephesians 6 armor of God over him as he enlists in the fight.  pray for his continued spiritual growth and his steadfastness.

and praise God for choosing this humble kid with the soft, moldable heart.

Beautiful! Brought tears to my eyes. I will always remember this and will continue to pray for him and all of BV!

I agree with Rachel! I'm grinning from ear to ear. Praise Jesus for this victory and the power He showed us that day.

Amen, amen and amen! God is amazing. I can't wait to see what He does next!

Excited to see how God will continue to work through Wilmer to continue to transform BV!!

This is just the beginning of Wilmer's journey and Father will bring him to our minds so we will pray for him. We also pray for amigos and companions to come along side.

Praise God for His power. The Style family will be praying for Wilmer !!

I continue to thank God for you, and your family, your hearts for BVSA boys and this village, for blessing us with His presence during this day! I keep all of you in my prayers.

Praise God! Thank you for sharing Wilmer's warrior story. (tears in my I eyes)
I pray for the families in BV often and know that our Heavenly Father is being glorified in so many lives of there.
Peace and Love!