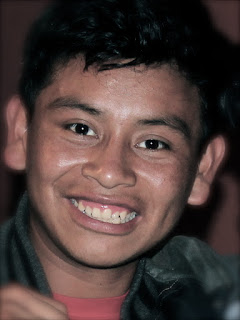 just saying his name brings a smile to the face of all of us that know him.

this kid has brought more joy to my life (and a little angst too) over the last few years than almost anyone.  he just has a way of lifting up the room... bringing life to the party, so to speak.

he's always been the funny kid, full of life and lots of fun.  but here's the thing:  he's become a man.  and while he's still a joy to be around, he is maturing into a young man who knows when to joke, and when its time to get real.

early this year, allan came to faith in Jesus.  a genuine transformation began taking place in front of our eyes!  what was once obligatory daily devotions, became an intentional desire to listen and change.  even our tuesday night bible study became something more for him - a time to go deeper, study more, and commit to better lead his teammates.

Allan the "life of the party" became Allan the leader.  and the best part is that he is still the life of the party!  one of the problems in our little village is that, traditionally, when someone comes to faith, they become robotic.  they go to church, stay out of the streets, outwardly doing and saying all the right things.  but it is lifeless and unattractive.

Allan is learning the difference between religion and a relationship with Jesus.  he is learning that his personality was created by his Maker... that he doesn't have to become a serious religious-type in order to follow Jesus.  instead, he is allowing his unique personality to be exactly what God is using.

man, i love this kid.  completely on his own, he recently partnered with his sister (unheard of here) and another local woman to do a fundraiser so that underprivileged and malnourished kids can get some healthy food and christmas present.  on his own.  we literally knew nothing about it until he had already done it.  he even encouraged the Rhinos to each donate Q10 (about $1.30) each to the cause.  every single Rhino participated.  that speaks to his leadership and influence.  again, he did this without us even knowing. 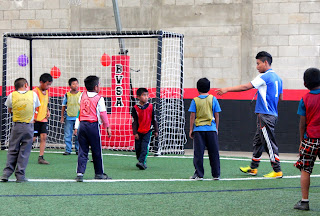 the last couple months, he has been doing "vacation camps" for the kids of the village.  using the bvsa gym, he runs soccer camps every morning from 8am to 12pm for the local kids.  he and Wilmer even do a daily devotion with them.  all of this without any help from us.

these are the things that make my heart skip a beat.  we are watching before our own eyes the vision of BVSA become a reality.  6 years ago, before there was any boys academy, i wrote the following, which can now be found on our website:

"We believe that God wants to raise up a group of young men to be loving husbands and fathers, respected leaders, and godly men, who can break cycles of abuse – and absence of biblical family values – related to poverty in the village of Buena Vista, Guatemala."

Allan is an example of this vision becoming a reality.   i have no doubt that this young man will be a loving husband and father.  something different that this village has never seen before!

and at only 19yrs old, he is already becoming a godly man and a respected leader.

God bless and protect him! And you are so right....he lights up a room! Just hearing his name brings a smile to my face.

amen to Mimi's post - we love Allan & are very excited to see what Hod has in store for his life. praying continuously for these boys/men.

Praise Jesus! He had a plan to raise up these leaders in the community and you guys get to be a part of that! So awesome! God is so amazing.

It's so amazing seeing God work in the village! Seeing Allan grow up in a Godly way is a true testament to His power and His glory!

Allan has a light about him that just radiates joy and is so contagious! God is so good.

SO encouraging to read about! I love that kid and seeing God transform him into a great man for his kingdom!