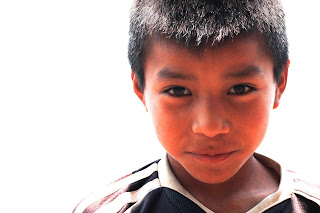 the doorbell rang last night late.  it was christian's mom.  christian (better known as "kitty") was at home struggling with a stomach ache.  she said he was in a lot of pain, and was asking for some help.

i assumed it was something normal like parasites, amoebas, or an intestinal infection.  all normal stuff around here.  but i asked dr. carlos if he could go check on him.  immediately after seeing him, feeling his stomach, and asking a few questions, dr. carlos said to get him to the hospital - fast.

dr. carlos has never been an over-reactor.  i asked paul if he wanted to come along (their family is in town) and within 30 minutes or so we arrived at the national hospital in antigua.  tests were taken, and by 1:30 am kitty was in surgery having his appendix removed.

apparently kitty had been struggling with stomach pain for over a week.  he had mentioned to me at the academy that he had a stomach ache a couple days ago, but it didn't seem out of the ordinary.  it didn't keep him from practicing and doing normal activities.  little did i know his appendix was inflamed and likely to burst at any time.

1- i'm so thankful that salomé (kitty's mom) knocked on our door for help.
2- so thankful for dr. carlos and his uncanny ability to diagnose things fast.
3- i am amazed at how tough this 11yr old kid is.  from what i have heard, the pain from an inflamed appendix is excruciating.  its just amazing how people here, even kids, fight through physical pain.

we're praising God for all of the above!  in talking to dr. carlos tonight, kitty's appendix could have burst at any moment.  if it had, he could have easily died.  i just can't fathom that.  it is moments like these when i find myself praising God for the privilege it is to live here, and simply be available to help the people of our village.

Hope He is recovering well!