its been an eventful week or so leading up to "semana santa".

it started with a visit to bvsa honduras to see the davis family and axel.  mynor and i, along with my girls took a bus this time (probably not doing that again).  we were also blessed to have some friends join us this time - dave, vic, and paul. 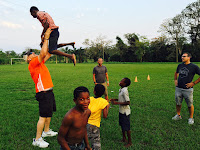 we are really excited to see what God has planned for bvsa honduras!  we know that He led us to the village of travesia.  we know that it is a broken place.  sexual sin and HIV are rampant.  fathers are absent.  poverty is extreme.  while ministry has already begun (the davis' and axel have been there for over a year) soon, we'll start raising funds to build the academy facilities. 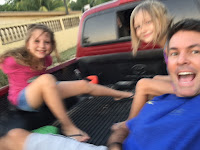 while we were there, paul (davis) was playing in a basketball tournament for the local team.  he was already playing with a sore knee.  he took a ball on the post and spun around... only to hear a "pop" in his knee and hit the ground hard.

about 15 minutes later we were in the local hospital (don't think your typical emergency room) being told that there's nothing they can do as they have no MRI machines.  the closest one is in san pedro sula - over an hour away.

before we headed that way, we called to make sure... and were told they don't use the MRI machines on the weekend.  (it was saturday night.)  all we could do was laugh.  well, not paul... he was in too much pain :)

monday mornings MRI showed a completely ruptured patella tendon.  because of our relationship with dr. chew in guatemala - a close friend who is an orthopedic surgeon specializing in the knee - paul was on a flight late monday night to guatemala. 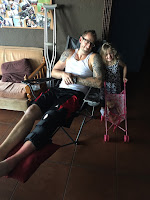 tuesday morning the diagnosis was confirmed and just a few hours later paul was having major knee surgery.  we are thankful for many prayers that were answered, including overnight reduction in swelling that made the fast surgery possible, as well as financial provision for the operation.

praise God - surgery went well, and paul is here with us recovering.  i know he'd love to be with his wife and girls for easter, but its been good to have him here.  we're just thankful for Gods purposes, even when we don't understand them...  and thankful to be able to help in a small way.