why the thugs don't much matter

after posting my blog about the men of my village ("the thugs of BV") i received several responses - and i appreciate all of them!  some contained advice about what we can do differently.  a few simply gave heartfelt encouragements.

in our talks as a family and ministry team here at BVSA, God often reminds us that sometimes, when things get bad enough, it takes "generational turnover" in order for real change to take place.  so many examples in scripture speak to that fact.  and while its an encouragement during times of frustration, its also a daunting thought.

one friend shared with me a story about an unrelated conversation he had with a friend of his recently.  they were talking about how employees in certain places, like hospitals and banks, have to cover up their tattoos while on the job.  one of them asked "i wonder when that will change".  after some thought, they determined that it would probably change when the bosses are the ones with tattoos.

get where he was going?

another friend, experienced in tough cross-cultural missions, put a similar encouragement this way:


"What you're doing with the young men you lead will change all that!  I'm sorry but you'll just have to wait.  And if it's any consolation,  Paul was most probably beheaded before Corinth got straightened out."

ha!  another "encouraging yet daunting" thought!

these encouragements are SO appreciated.  this is the love and support of a community of believers, albeit long-distance community!

and here's why the thugs don't much matter anyway. (in case you didn't read that particular blog, by "thugs" i am talking about the set-in-their-ways, beat-your-wife-and-kids, opposed-to-the-gospel, men of of our village).  as frustrating as they may be, the thugs aren't going to stall our momentum!  check out these highlights from just the last week: 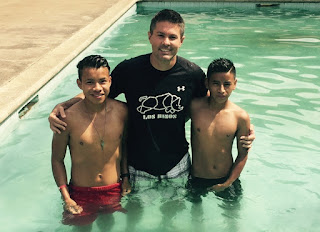 there is no doubt that God is at work.  deep generational chains of abuse and opposition to the gospel are being broken.  a new generation of men / husbands / dads / leaders are rising up!

GOOD FOR THOSE BOYS! PROUD OF THEM FOR BEING THE GODLY BRAVE MEN OF THE NEXT GENERATION.
WHAT AN ENCOURAGEMENT THAT IS.
POPS

It's amazing to hear about these guys truly standing up against the 'thug' culture! Also, when I read "allan and wilmer met him at the door. they prayed with him and assured him that he did the right thing.", that is truly God at work in those boys and it is amazing to hear that they are doing the right thing at home and then supporting each other as a Godly community! This is so uplifting!!

keep kickin' it 4 the king man.....love to you and all the rinos and all your family and partners.....when communication is clear decisions are easy.....communication from the bible to me says, stand up for others, take care of others, don't let your sister and mom get their butts whipped anymore....like its sin when that beating is happening...so if jesus died on the cross to erase sin....if we do nothing...then whats the point of jesus being on the cross....you are all making a difference....you have made and continue to make a difference even there and over here....i hope i can help your girls as they make some new changes soon....as you have helped shape my kids in some very awesome ways.....tears as I type....keep ya head up....love and hugs....Juanito!!

Awesome blog Brock and so glad to be in the fight for this village alongside you. God continues to redeem parts of BV and soon they will all fit together for a much larger redemptive picture of what's been taking place in lives for the past 8 years.