before you read that title and draw another conclusion, let me explain :)


if you are familiar with us and our work in the village on buena vista, you probably know rosibel.  she has been like my own daughter for many years.  after losing her father when she was young, she has a lived a life that many would consider tragic.  but she made the best of things with an incredible grit and determination.  not to mention maintaining a joyful spirit and beautiful smile.

here's a couple stories i've written about her if you'd like to check them out. one from august 2012, and another from december 2010...

i will never forget the first time i heard God tell me to take special care of this girl.  it was 2010, and we were walking to a nearby village where rosibel's grandma lives.  as we quietly walked the long trail, she reached out to hold my hand.  she didn't say a word, just held my hand for the next 10-15 minutes as we walked.

i looked back at kerrie at one point (walking close behind us) and saw tears in her eyes.  we knew rosibel's story.  we knew she needed a daddy.

the last 6 years with rosibel have been special.  during that entire time, she has been together with alex, one of our rhinos (read a little about him here).  alex, aka "pastor", graduated from the rhinos in 2014.  all things considered, its been a really good relationship.  with alex being a rhino, and rosibel being like our own, we've had tons of opportunities to invest in their lives.

when they told us they were expecting a baby, we were a little disappointed and a little happy.  in this culture, marriage doesn't always come before babies.  rephrase... marriage never comes before babies.

of course i agree that sex before marriage is wrong...  but there's more to it than that.  in extreme poverty, people don't officially get married because of the costs associated to it.  the expense is literally the only reason that weddings/marriages aren't common.  even the cost to go to the courthouse and register your marriage is too much for most couples to afford.

so people typically begin life together without taking the formal steps.  arguably not the right thing to do, but understandable at the same time.  unfortunately, in extreme poverty, things such as these don't get to fit in a nice, neat box.

part of our job as missionaries is helping people get to the heart of the matter through a relationship with jesus, while not forcing our privileged way of doing everything.  so with regards to rosibel and alex, we walked them through seeking forgiveness for having sex before marriage, while staying positive and encouraging them regarding the beginning of their new family.

in one of those "counseling times", alex emotionally told me how thankful he is for his time in the boys academy.  he told me that being a rhino molded him into the man that he is.  he told me that the husband, soon-to-be father, and christian that he is... is all due to the years he was in the academy learning about jesus and life.  he said he learned how to be a husband and dad by watching the men here at the academy.  holding rosibel's hand, he promised me that he would take care of her always.
baby madison alexandra was born a few months ago.  when we went over to see her the day after she was born, rosibel handed her to me and said "diga hola a tu abuelito", which means "say hi to your grandpa." 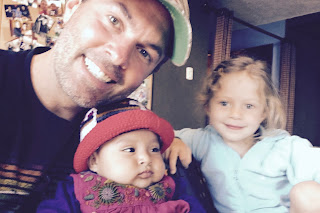 my heart was overwhelmed.

God willing, baby madison (named after my oldest daughter) will grow up a lot different than rosibel did.  her dad - a rhino forever- will love her, protect her, and lead her to jesus.

and i'm sure she'll have the same grit and determination as her mom.  yes- baby madison has hope,  tremendous hope.

and she has a proud gringo abuelo too.

The birth of a nation? Lord we pray!