enrique is going to college 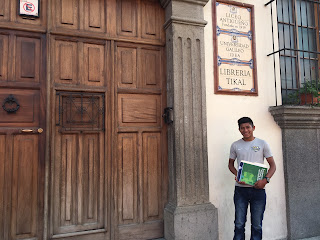 today i walked into the university of galileo with a young man from the poor village of Buena Vista to register him... for college!

enrique lopez will be studying business administration at the university of galileo while also working part-time in the boys academy in an administrative role.

its been a long road for this young man!  he has been with us in the academy since the first day we opened almost 6 years ago... has had an extremely difficult life...  has genuinely accepted Christ as the savior of his life, been baptized,  and committed to follow Jesus...  graduated from BVSA as well as from high school at CEDS...  and also slipped back into old ways and fell away from God.
as of about mid-year last year he started coming back around.  he began expressing remorse for some bad decisions he had made.  he was struggling to understand grace and forgiveness.  as we walked him through those truths, the weight that had been heavy on him began to lift.  he started coming around more and began attending bible study again.  allan was also a huge influence in his life during this time.

i couldn't be more excited for enrique.  as we look towards the future, i believe his potential is limitless.  as he grows in his faith, there's no telling how God will use him! 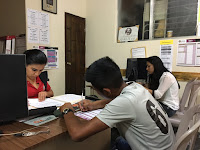 as he we sat in the office today and he received his textbooks for his first semester of college, i asked him in a whisper how he felt.  all he could utter was "nervous."

but as we walked outside of the registration office, he told me something quite profound.  he said "brock, no one from Buena Vista has ever gotten a college degree."

wow - what a thought!  please join us in praying for enrique...

Such great news! Definitely praying for him through his studies and I look forward to him being the first from BV to get a degree!

A punk with spunk. Amazing what God has accomplished through you Johnsons.