a few weeks ago, we returned home from a 2-week trip to west africa.  i'll never recapture all that God
accomplished on that trip in this blog post.  for that i've got a journal full of thoughts, stories, prayers and meditations.  but here's a few simple take-aways from the trip. 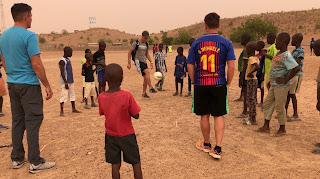 1 - the heat in west senegal is a lot different than the heat in the east senegal!  and it takes quite a journey to get from one to the other...

the capital city of dakar sits on the western most point of the entire continent of africa. there, the climate is nice - hot during the day, but cools down at night - and there are grocery stores and places to eat.

but BVSA-Senegal, God willing, will be located on the complete other side of the country. we left at 4am on our third day in dakar for the trip east.  after about 2 hours we seemed to have left all infrastructure and civilization behind, and were left with nothing but desert on all sides.  the first 6-7 hours was comfortable... decent roads and the air conditioner was working!

the last 5-6 hours of our 13+ hour journey were quite different. the paved roads had become desert sand, which didn't allow us to go very fast at all.  the slowing of the engine and the increase in temperatures led the air conditioner to lose its power.

i'll never forget the first desert-bathroom-break.  we stepped outside and the air was so hot that it didn't even seem real.  vic cuccia and i stood by the side of the van, stretching out our arms and legs, when a slight breeze hit us.  i never knew a breeze could be so miserable. it felt like the rush of air that you feel on your face when you open the oven...

after winding through the desert for hours, trying to follow navigation or look for power lines... we officially determined we were lost.  we were thrilled when we came upon a small village of teepee style cornstalk homes. the people were clearly amazed to see a van pull up, and even more amazed when they saw white people inside!  unfortunately, they had never heard of the village we were looking for... which left us back on the road to figure things out for ourselves.

we finally got there. a little tired and overheated...but we made it.

REWIND A MONTH:  we were at our home church of emmaus on a sunday morning, when a woman approached my wife, and to my best recollection, said the following:

"are you the ones going to work with the arnold's in senegal?  oh, i have to tell you... i went there on a mission trip a few years ago.  it's the most miserable place i've ever been.  the heat is unexplainable.  and there is no break from it.  i've never been so hot in my life.  i literally had to wring out my underwear.  oh, and the dust! its everywhere, and it gets into everything.  and on top of that, it's all desert there. there is no greenery, no grass, no trees.  it's just depressing.  but i'm so glad you are going!  they really need help!"

ha!  kerrie's face went blank - like she saw a ghost!  i'm not sure if it was because of everything the woman said, or simply because she had the nerve to say it!  eventually, we got a good laugh out of it...

but... to that lady's credit, i have NEVER experienced HEAT like i experienced in east senegal. this is dry, sub-saharan desert heat, where temperatures can sit at 130 degrees on a regular basis. our hosts, the arnold's, had warned us about it...  we had heard other people's first-hand stories... but until we felt it for ourselves there was no way to appreciate it.

2 - by the end of our trip, we had been trained to look out for snakes at all times.

i only saw one little guy the entire time we were there, but we were warned over and over to keep our eyes open, especially while walking around at night.

east senegal is the home of many of the deadliest snakes in the world, including the puff adder, the black mamba, the spitting cobra, and lots of different vipers and cobras.  at one point, i was walking through some brush (at night, using my iPhone camera) and a guy who was on the trip with us snuck up behind me and firmly pinched the back of my leg with his fingers. i screamed like a 5 year old girl! needless to say, we will learn to keep our heads on a swivel living in east africa...

3 - the senegalese people are warm.

a decade in central america, especially the village where we lived, led us to be somewhat skeptical.  there, most people have a "hard edge", and you never know who is connected to gangs and cartels. killings, kidnap & ransoms, death threats for money, carjackings, etc, are common place.  with that, you  simply develop natural defenses over time.

but rick assured us, over and over again, that the senegalese are not this way.  and it was evident in the way they received us.  people seemed genuinely interested in us and wanted to talk.  some men invited my son and i to play in an early morning soccer league. even there, the men were extremely friendly and welcoming.  the next day, some guys in the street asked us why we didn't show up again that day... they said "twice as many people showed up because they heard some visitors from america had played yesterday!"

being used to a culture of chauvinistic macho-men, who give a stare-down and "bow their chests up" to any one visiting from out of town, this was a welcome change of pace. the general warmth of the people certainly helped off-set the difficulty of the elements (heat, dust, etc)! 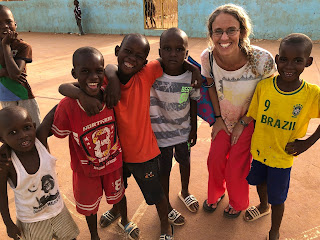 4 - here's my favorite moment of the entire trip.

after a couple of days in the village, i was definitely growing concerned about my wife.  it was so hot, and dusty, just like our new friend had warned her a month earlier (lol).  my mind was on her and my 6 year old daughter.  i kept thinking to myself, "are they going to be ok here?".  "i can handle it, i actually kind of like it!  but i don't want to drag them here if they don't like it."  i prayed those 2 nights, telling God how i felt, and surrendering it to Him...

the 3rd day, we were out and about in the village. we had been interacting with a family, and some children in the street. in the commotion of it all, kerrie tapped my leg and said "hey." when i looked at her, she said to me softly, with watery eyes, "i love it here."

words can't describe the peace i felt in that moment.

God is faithful.  God is good. only the peace, joy, and purpose offered through Jesus defies logic like this.  my wife - lover of trees and cool weather - loves it here.