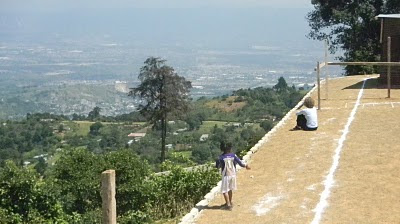 God put this crazy idea in our hearts to build a gymnasium in the town of Buena Vista, Guatemala. A place to be loved, a place to play. A place to train the boys of the village not only in soccer – but in faith, character, and love. A gymnasium is something a poor rural village like this has never seen before…

So much more than a gym. For us it’s the answer to a question we’ve been asking for more than 2 years. “How can we best change this place over the long term?” We’ve been meeting needs since we got here – and we will always be a needs meeting ministry – but after a while you start longing to go deeper.

When a village is plagued with hopelessness, abuse, addiction, and empty legalism religion, what do you do?

Plant a New Garden
What if it were a garden? Imagine… the plants are lifeless. Nothing is growing. The crops are dead. Everything is dry and brown. For years, nothing has produced.

I think you would prepare the land, then plant new seeds. After you plant them, you would take care of them. They need a combination of water, sun, shade, and attention. Some grow faster, and fuller than others. But eventually, after a lot of hard work, love, and care, you will begin to see a healthy garden.

That’s what God is leading us to do in Buena Vista. It doesn’t mean give up on the adults. Our lives are our ministry, and we’re always available to help anyone at any time. But as far as a daily effort and focus, God told us to zero in on the kids. They are like seeds full of potential - crying out for nourishment.

We have had 2 years of tilling the land. Making friends, earning trust, and developing relationships.

Grow Leaders
Who are the future leaders of Buena Vista? Or, any community for that matter? In large part, they are the boys. Those who will soon become young men. After that, husbands and fathers, responsible for leading their families.

In this community, as is common in Latin American poverty, the men are old school. They are chauvinistic and domineering. They do as they please and expect their needs to be met. Many hit women and children. Most escape from their realities through drunkenness or simply disappearing.

In general, the kids in this village have no direction. Their parents don’t care if they go to school or not, much less about their grades. They don’t bathe. They don’t show respect towards adults. Boys treat girls terribly.

It's not their fault. They have no hope because their parents don’t have any. Neither do their grandparents, uncles, or friends. They’ve never seen it before. How could they know hope if they’ve never heard of it?

Our goal is to bring them hope. To tell them that grace abounds. To show them truth. To bring them Jesus.

We are praying that God will allow us to guide a community of boys into a new generation. A generation of love, service, generosity, and strong character.

We’ll start with 24 boys, and we’ll pour into them. It’s a daily effort. Every day, teaching in areas of faith, discipline, character, love, grace, respect, honor. They will literally hear the stuff every day for 4, 5, 6, 7 consecutive years of their lives.

What could that look like? 24 boys become young men, get married, lead strong families. Different families. Each young man impacts a few of their friends. After all, they’ll have each other… a team of Jesus followers. That will be attractive. Others will join. Love, joy, and goodness, is contagious.

Each have anywhere from 3-8 kids (not uncommon here!). Now a generation of new men are leading strong families… hundreds of lives changing in one generational swing. It’s a new direction of love, freedom, grace, joy… and hope.

And that’s just the beginning. If I have the ability to even imagine this much, who knows how much more our God – the creator of the universe – is planning?

Must Read - Crazy Cool God Stuff
Well, as if we didn’t already know this vision was God’s vision, here are some pretty cool confirmations.

God used a youth group (and a dollar-for-dollar match donor) to raise the first $20,000 for the boys academy. With that, we bought a piece of land that had given us goose bumps ever since we saw it. (It is right next to the playground and basketball courts we fundraised for and built.) The owners actually knocked on our door having no idea we were interested… but that’s a whole other story!

God brought us a contractor and architect who are practically taking on the project pro bono. They are Christian guys who heard the vision and want to help.

After being told we needed $9,000 to get started on phase one, we received a donation the next day from a first time donor for $9,000.

When we ran out of those funds, the contractor told us in order to continue through the next part of phase one, he would need at least $10,000. Two days later, we received a check in the mail from a first time donor. The note said, “please use for the boys academy.” The amount was $10,000.

In 10 days, we will need more funding to continue construction. After meeting with the contractor a couple days ago, he said we need $50,000 to finish the framework, columns, beams, and roof. He said with 40% of that (20k), he could purchase materials and get started. Today we received a donation. You guessed it – $20,000.

I am at a total loss for words. Following Him takes my breath away.

Does that sound crazy? It did to me. But I am beginning to think it doesn’t to God.

“That’s too much money,” I thought, “seems excessive.” “Lets pull the plug, do something smaller. Besides, I hate big fundraisers.”

But God worked on me. He checked my heart. He taught me, stretched me. He began showing me that money isn’t the issue. The heart is. It’s always the heart.

The missions pastor from a church that I had never visited recently gave me a call. I knew the guy, but not that well. His son married my little sister, and he had conducted the wedding. The wedding was not long before our family moved to Guatemala. So while we had met, it wasn’t more than a couple times at family get-togethers. I knew he was a missions pastor, but that’s about all.

He called to say he would be traveling to Ecuador soon, and asked if he could stop through Guatemala and give us a visit. Next thing I know, he and another pastor from their church were here staying with us. It was a great visit, albeit only a couple days. We got to know them better, and them us.

Long story short, assuming their own goals are met, they recently committed to give $200,000 towards the boys academy. (That last 20k I mentioned was their first payment towards it, which came earlier than expected.)

“That’s the minimum”, he told me. “We believe in what God is doing here. We want to help more – whatever we can do to support what you’re doing and help free this community from the bondage that poverty has on them.”

Lazarus Raised – Everyone’s Faith Increased
If it’s even possible to sum up my feelings right now, it may be best compared to how Lazarus’ sisters probably felt after Jesus raised him from the dead. Mary and Martha believed that Jesus was the son of God, that He was capable of doing anything. They had already witnessed many miracles.

When Jesus commanded the stone to Lazarus’ tomb be removed so he could raise him from the dead, Martha again objected, concerned of the awful odor that would escape. Finally, Jesus says, “did I not tell you that if you believed you would see the glory of God?”

Martha and Mary loved, followed, and believed in Jesus. Like most of us, they just lacked a little faith. When he displayed His power right in front of their eyes, I expect their faith must have increased tenfold.

That is how I feel. I doubted, worried, and hesitated. I am still nervous about moving out to Buena Vista. But God has asked me to step in faith and commit everything I have to this vision. He asked that of us well before providing all the resources needed to make it happen. It would require some faith.

Now, as I sit back and watch Him at work, I feel as if he is saying to me with a bit of a sarcastic smirk, “come on dude – didn’t I tell you that if you believed you’d see the glory of God!”

May His glory be seen through this ministry. May His name be lifted high. May many come to know Him. As this poor little village in Guatemala undergoes transformation, may the name of Jesus Christ be made famous!
Posted by brock at 12:19 AM 7 comments: 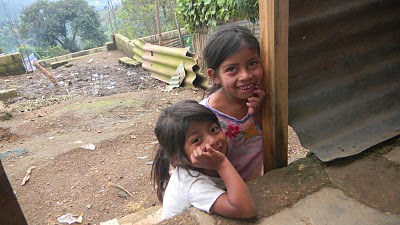 with our friends the primosch's and jackson's in town this weekend, we squeezed a week into 2 days.

supporters of the boys academy, we first went out to the jobsite. while out there, we played with the buena vista kids, visited several families, read books to kids, and gave out donations.

we then spent some time at the women's baking school. it was the day of the students first exams. all 6 students had to bake a cake, pie, or dessert all by themselves... and we got to taste test all of them! they were all delicious... all passed with flying colors. more special than the desserts themselves were the smiles on the ladies faces. they shared their stories, their dreams, and their gratitude. a few tears were shed... it was a wonderful time together.

then we were invited as guests to the 50th wedding anniversary of one of our 12x12 Love Project employees, Jose Cupertino. you heard right... yes, Cuper is 70 years old and works in construction... on his feet all day, carrying 50lb sacks of concrete and hauling block. this guy is a machine. and his anniversary party was awesome. lots of music, great food, and good people. we arrived late after being at the baking school, but when we walked up, romulo escorted us to the front table where they were holding seats for us! it was a great night...

the next morning we headed to the HIV orphanage. more tears shed. great time with the kids, but even better with the nuns. we brought 15 gift bags to give to the nuns (thanks to martha & tom primosch and all their friends who donated items!) and they were so very thankful. we had a great time laughing and joking with them... the orphanage director summed it up when she said, "listen - everyone always remembers the kids, and we understand that, but this sure is special to be appreciated like this."

from there to antigua for the markets and lunch at monoloco...

returned to buena vista to hang with the family that the jackson's and their youth group donated a home for. a great visit with them, as well as a few other folks there in the village. back home for dinner and hanging out with the leiva family!

at 5:00AM this morning we took them to the airport. as i was sitting here going through pictures from the weekend, this one that i am attaching caught my eye. it reminded me that when things settle down, the running stops, and all is calm... there they are. the kids of guatemala. the faces of buena vista. how precious. they are why we do what we do.
Posted by brock at 7:58 PM No comments: