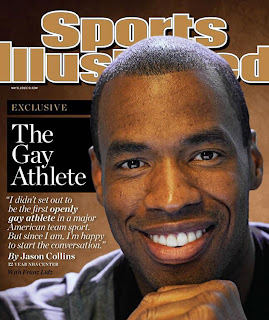 i saw in the news this morning that NBA player jason collins became the first active professional athlete to "come out" and announce that he is gay.

first of all, he's a free agent that has averaged 3 points per game over a 12 year career and may not get picked up again... so the term "active player" is up for debate.  haha...

as always with this topic, i have mixed feelings.

i tend to side with the gays when it comes to the conversation within the christian community.  what i mean by that is, i think most christians deal with the issue very poorly.

to be clear, i do believe that homosexuality is wrong.  but we are all sinners.  we become hypocritical and/or self-righteous when we harp on one sin and single it out as if its worse than our own.  (can you picture in your mind the gluttonous, overweight pastor giving his 40 minute barrage against homosexuality?)

back to jason collins...

on one hand, i think the support he has received is pretty cool.  his teammates are protective of him, and are willing to stand with him despite his differences.  that is honorable.

on the other hand, i am saddened that americans (supposedly over 90% "christian") easily conform to the popular - even when it swings opposite from biblical truth.  it seems that even for christians, hollywood/athletes/etc set the tone for what is acceptable and right - instead of the timeless word of God.

what creates conflict and tension, at least for me, is that many of those who do stand for biblical values do so in a loud, arrogant, obnoxious way.  and in doing so, they make me look like an idiot for being a christian.  that makes me angry.  i want to scream out sometimes:  "don't lump us all in together - we're not all the same!"

if jesus were alive in human form today, i think he'd give jason collins a hug, tell him how much he loves him, and lovingly share the truth with him.  he'd tell him that he was created perfectly - with purposes to unite with a woman, start a family, and serve God together with his wife and kids.  i think he would explain to jason that homosexuality started years ago when people rebelled against God and decided they wanted to do whatever they pleased.  i think he'd remind jason that he is free to make his own decisions, but encourage him to fight against the desires of his flesh, and overcome.

then he'd probably do something supernatural, like a jumpman dunk from half-court, just to let jason know that he is who he says he is.  haha...

the good news is that jesus still is alive.  and he will no doubt speak to jason - as he does all of us - through his followers, his word, and his spirit.  we should love jason collins, and the entire gay community, while encouraging them as believers in God's word.

we should also be careful not to outcast people that we disagree with.  i can hear the christians all over this morning, in response to the jason collins story, talking about the times changing, how the world is going to hell, and how the end times are near.  they'll probably also mention how Obama is still the anti-christ...

before all of that over-reaction, let us not forget that homosexuality is thousands of years old - as are the origins of all of our own sins.

my faith in jesus christ is where my joy comes from.  despite whatever situation, suffering, challenge, tragedy, tension, or stress - i take joy in knowing that He is in control, and he cares for me deeply. he knows me. he has prepared a better place for me. he died for me, and in doing so assured me that any hardship that i endure in this life is not in vain.

big tournament for the JV rhinos


Our JV Rhinos recently left their mark on a tournament in Guatemala City. Playing at the Futeca Soccer Academy, our boys staretd slow - seemingly over their head.  Typically playing against teams much bigger than they are, we finished the season with a .500 record, and barely snuck into the playoffs with the last seed.

But we had grown as a team during the year, getting better week by week.  In the first round of the playoffs, we knocked off the #2 seed to get to the semi finals!  In the semi's we lost to the #1 seed by 1 goal.  A sad loss as we felt we outplayed the other team, but they had a fluke goal bounce in toward the end of the game.

We played one more game to see who placed #3 and #4 - and won that game convincingly to take the #3 spot.  It was a great day... we received the bronze trophy and each of the kids received medals! 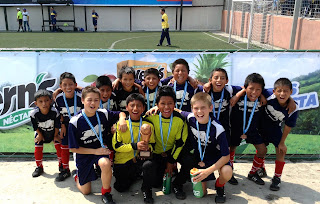 Its fair to say that for our boys - growing up in rural poverty, and most having never even left their village before the boys academy started - this was a moment of a lifetime.  In front of a packed crowd, they were called up on stage to receive their trophy.  A member of the Guatemalan National Team greeted them and gave them their medals.  What a memory for these kids, and what a testament to the hard work they put in every day!

its been an emotional couple weeks.

with a team of friends in town, we met a young girl who had a severe problem with her ears and nose. 4 years old, her nose and ear bleeding - completely miserable. sadly, she's been in this situation for years.

we've had boys quit and leave the academy.

we've had health issues in our family.

we've cried numerous times in the last couple weeks with locals who are suffering in different ways.

but amidst all of this, God has been so very faithful.  moments of his sweetness have carried us, filled us with strength.

we were able to help the young girl with the ear/nose infection, and get her to a specialist.  and another young girl that we love to a doctor to discuss surgery options.

we've experienced growth by talking and praying through the issues of tension.

we've grown closer with local friends as we've cried together.

and as always, sitting down with my friend Cesar puts things in perspective.  his entire body fused together, he has a bone disease that should have killed him nearly 8 years ago.  he is in constant pain, yet maintains has a joy in the Lord that is unexplainable.

he adores our daughter Luciana Andrea (named after his wife).  amazingly, every time we bring her to see him, she smiles the most wild, incredible smiles.  this day was no different... 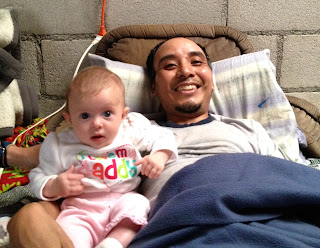 as Cesar recounted the first time he met Luciana Andrea, at 1 week old, he made a simple comment that humbled me and ministered to me deeply.  last year (2012) was the toughest year of his life - he was on the brink of death numerous times.  he said he had been praying fervently throughout the year to allow him to meet Luciana Andrea.

when he saw her for the first time, she was asleep.  we placed her on his chest, and he cradled her in the one arm that he could still move.  in her sleep, she smiled the biggest, most outrageous, intentional smile. it was crazy- we all had goosebumps.

anyway- back to the present day.  as Cesar retold the story, he said that in that very moment, when Luciana Andrea smiled at him at 1 week old, he heard the voice of Jesus through her smile.  the voice said "I love you Cesar- you asked me for this." 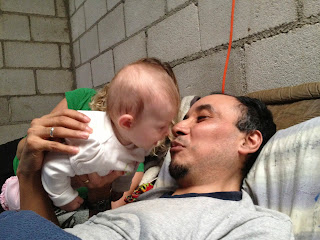 to think a newborn baby can minister to a man who has been faithful through almost a decade of pain and suffering.  her smile speaks to him in the voice of Jesus.  unreal.

God gives strength during the tough days.  he so often reveals his goodness to me when i am "down."  i am thankful for these reminders. they give me energy and joy. they help me see my selfishness and put things in perspective.

Paul said to us in 2 corinthians 6:  "through glory and dishonor, bad report and good report...dying yet we live on, beaten but not killed, sorrowful yet always rejoicing, poor but making others rich, possessing nothing but having everything..."

the other day night i got a visit from one of our varsity rhinos. in tears, he shared that he and his brother had busted his dad in a relationship with another woman.  long story full of details...

as he cried, he asked me "why? why would he do this to us? why can't he just love my mom and respect her?  why aren't we good enough for him?"

to put this in perspective, we live in a village where virtually ALL of the men do this.  it is commonplace.  women are slaves to cooking, raising kids, and having sex.  they don't have much more value than that.  the men abuse them terribly.

so this 16yrs old is used to this.  it is nothing unusual - he has seen it all his life.

but hidden in this dark story is a ray of light.

the fact that this young man was upset at his dad is a big deal.

so often we have to take the bad with the good.  the bad news: another Buena Vista man is destroying his family.  the good news:  his oldest son is on his way to breaking the abusive chain that has been repeating itself for generations.
Posted by brock at 10:49 AM 1 comment: