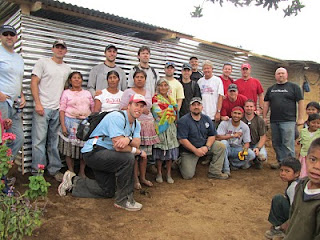 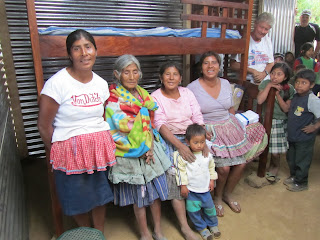 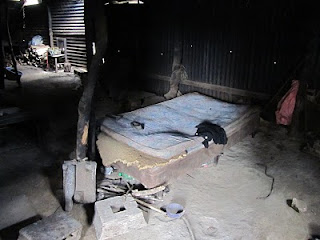 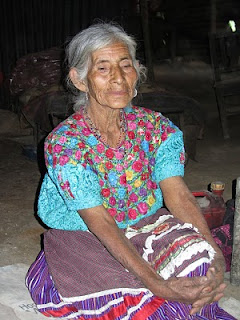 with the annual men's team in town, we had the wonderful opportunity to build a new home for an elderly widowed woman.

rafaela lives in the village of tablon - a remote area in rural guatemala. her home is literally a disaster. a rotten tin shack layered in thick soot from her indoor fire (pics attached). her home sits directly behind one of the soccer goals in the village. i have been in her home while the men are playing soccer. the ball bangs against her wall time and time again, echoing louder than you can imagine. she sits on her floor sobbing. its dark, hot, and nasty... and she has nowhere to escape it.

with 16 friends, we rallied together to build rafaela a new home. furnished with a separate kitchen, new beds, linens, towels, and a giant basket of food.

when we had finished, we walked rafaela from her old home to the new one (pics attached). it was a beautiful moment! we celebrated in prayer and laughs, all of us thankful that she will never spend another night in that dirty, smoke-filled shack.

to watch a video from the men's trip with footage from rafaela's home project, click here: http://www.youtube.com/watch?v=5YhsFq4dKkU

"religion that is pure and undefiled before God is this... to look after widows and orphans in their distress..." james 1:27
Posted by brock at 10:50 PM 1 comment:

so proud of my girls 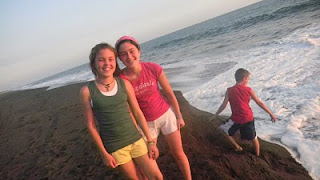 the kids are a month into their 3rd year in local school. each year has been a huge step towards becoming "comfortable in their own skin" in a fully spanish speaking guatemalan school. but this year has clearly been different.

all 3 kids have told me already how much they are loving school this year. i think it has a lot to do with the language. their grasp of the spanish language is increasing year-by-year to the point that they are able to fully express themselves. brooke recently told me "i am finally able to be sarcastic in spanish!" (for those that know her, a key component of her personality...)

jake is totally adjusted, and for the most part has been good-to-go from day one. i brag about him all the time... but this post is to share how proud i am of my girls.

we found out a week or so ago that both of the girls were running for office in their student council. while this may sound routine for many teenage kids, remember that they are in a foreign country, speaking another language! we were shocked!!

they both won. madi is the secretary of 8th grade, and brooke is the president of 7th grade!

we are so proud of them. not because they won, but because they were even willing to take the shot. and because they have adjusted so well. they know how to "bounce". they adapt, look at the bright side, don't complain, and trust God in the challenges. they have all struggled through C's, D's, and F's (when they didn't know any spanish), to now all 3 making their honor roll's.

there are still hard times. just a couple days ago, brooke shed a few tears with me as she shared how a group of kids laughed at her after mispronouncing a spanish phrase. we talked it through, gave it over to God, and she got over it. the next day she found out that her classmates had elected her president...
Posted by brock at 8:49 PM 1 comment:

cause of death: poverty 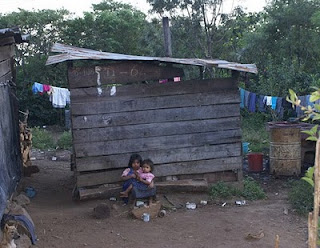 one of the boys from buena vista that we play with all the time - alan - recently lost his dad. suffering with stomach pain, he had been avoiding going to the hospital. aside from not being able to afford medical attention, he had become accustomed to dealing with pain and not going to the doctor. all too common in extreme poverty.

it eventually hurt so bad he couldn't take it any longer, so he went to the local hospital. they told him his appendix had ruptured, and there was nothing they could do. "nothing they could do"? the next hospital said the same thing. he went home and died in his sleep, leaving behind his wife, alan, and his 2 younger brothers.

just a few days later, i met 3 more children that the same man had fathered with another woman in the town of magdalena. he had left them for his current wife years ago. the oldest boy, "chino", held back tears as he explained that they were expecting to get the money from their dad that very week for school uniforms, shoes, and school supplies. he said his mom told him they may not be able to go to school this year.

a ruptured appendix is not what killed this 31 year old young man. simply said, it was poverty that killed him. any one of us would have gotten medical attention and been fine. born a couple borders-on-a-map to the north, and he would have been fine too.

when you only earn a few dollars a day, have rarely been outside of your rural village, are intimidated by hospitals b/c they hand you forms to fill out (you can't read or write), etc, etc... this is what happens. in under 3 years living in guatemala, i have seen this happen time and time again. friends, daddy's, mommy's, brothers and sisters - unnecessarily dead - from something that could have easily been prevented.

statistics (if he doesn't fall under the radar) will say that he died from a ruptured appendix. statistics also report how many all over the world die of hunger, AIDS, malaria, and preventable disease. the true cause of death? poverty.

if we eliminate poverty, all these categories go away.
Posted by brock at 11:13 PM No comments: