the destruction of poverty 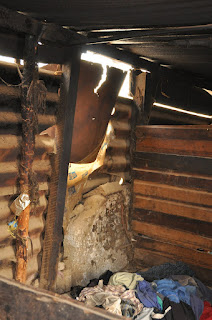 i have blogged about Doña Juana before. an elderly woman friend of ours who seems to be dying in her bed right now. she is a widow and an orphan, has no family. we are trying to move her to a better home where she can be cared for and fed, but she doesn't want to. the people she lives with now treat her terribly. but she is old and stubborn... we're not sure what to do.

last week our college team from KI4TK was in town - they spent a day working with the 12x12 love project ministry on a family's house. they painted, installed a sink, a kitchen, a stove, etc. chris just told me that yesterday the husband died. he recently had his leg amputated and the gangreen infection that followed left him dead.

we just got word that some friends of ours are HIV positive. God only knows how long they have had the disease. how do people living in extreme poverty even know?

thursday morning 2 boys from magdalena left to walk to school and never came back. they have been missing for 2 days now. recently in our little village of buena vista, people have been driving through the village trying to steal children to be sold. one guy even offered a woman cash for her baby. based on these increased cases, the 2 boys who are missing are presumed to have been stolen to be sold on a black market.

all of this has happened in one tiny town in guatemala, in just the last 48 hours.

God, help us to help the poor. we read it in your word, we know that you ask (demand) it from us. but help it infect our heart and consume our thoughts, provoking us to action. 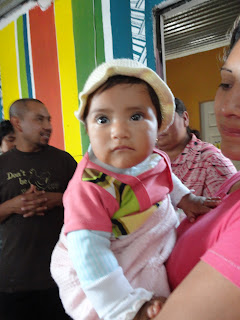 we had a great week with the KI4TK college team. God moved in several really special ways during the week, but i have to share this one story.

on thursday we walked up to carlos and telma's art school. after an hour or so of hanging out with them, we were sitting in the school when they received a knock at their door. it was 3 ladies and jasmine, a soon to be 2yr old little girl.

jasmine's mom, grandma, and aunt had no idea that we were there. they were simply going door to door asking for small donations to save up for jasmine's next surgery. she was born with several problems. she has already had one of her legs amputated, and her deformed left arm has been removed and reconnected. she has fingers growing together, and several other surgical needs.

we all knew without question that God had gone ahead of us to arrange this meeting at this specific time. we prayed as a group, and talked for just long enough to realize that some things dont even need much prayer. everyone there agreed - God had led them to this door, on this morning, because he knew we could help.

the tears unloaded when we shared the amount that God had provided for them on this morning. one of the things i remember jasmine's grandma sharing with us as she cried was that they were almost at the point of giving up.

we set up a plan to administrate the paying of the medical bill and organizing of the next surgery. our friends from KI4TK are hoping to go back to the U.S. and continue raising support to help jasmine with her ongoing needs.

pray with us that jasmine receives all the help she needs, including getting a prosthetic leg and learning to walk. and thank God with us for putting our team in the right place at the right time!
Posted by brock at 12:32 AM 4 comments: 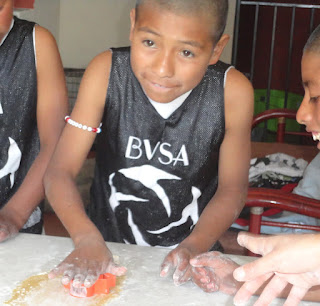 THANK YOU FOR YOUR PRAYERS!!!

jose is back. it has been a strange, interesting experience. they dodged meeting with us at first. then jose came to our house begging us to not talk with his brother b/c he was worried he would beat him up - so we waited and prayed, asking God what we should do. then finally mynor and i both felt certain we needed to talk with them, so we waited until 7:30pm one night until he got home from work and walked over to his house.

as we walked the dark narrow path leading back to jose's house, a man in a with a hood over his head came towards us. he kept his head towards the ground so we couldn't see who it was. as we crossed one another, i said "are you jose's brother"? he stopped, looked at us, and finally said yes.

we all walked back to his house, where it was pitch black - felt like it was 2:00 in the morning. not sure how to explain that, but later on mynor and i both shared with each other that we felt the same thing. dark, creepy... just didn't feel right back there.

as we talked, we both sensed the enemy was at work. jose and his brother were not at peace. they were angry with each other. we couldn't tell who was lying. jose cried. his brother went on and on...

finally, we stopped and asked if we could just pray for them. we prayed that God would intervene in that very moment, come to us in that place, and heal this broken home. heal this broken relationship between brothers. make them friends again. help them love one another again. we prayed that no matter what happens with jose at the academy, that this home would have peace, and relationships would be healed.

that night, around 10pm, i was on the couch talking with kerrie and i heard from the window jose's voice yelling my name. i went to the door and invited him in. with a giant smile on his face, all he said was "i'll be here tomorrow for school and practice."

i made him come inside for a minute... he said his brother and him "made up" and his brother told him that the best thing he can do for his future is to go back to the academy.

we're praising God for his immediate response, and continuing to pray for peace over this home and family. it is a dark environment back where jose lives, the neighbors, family members, uncles, etc. both mynor and i felt it strongly that night. and we believe its for this very reason that jose will eventually be the "light" to go in and light up the darkness.