God's timing is interesting and perfect.

i would have never thought we'd have a 4th child, 11.5 years after our youngest of 3!  but here we are with a precious, new, beautiful baby girl.

noah is now 1yr old (mynor & walda's son).  and paul and jessica have 4 girls, the youngest of which is 4 yrs old.

my point about God's timing is this:  God wants the Rhinos (the boys of the boys academy) to watch and experience dads being dads.

its something they have never seen.  that sounds like an extreme statement, but the longer i am here, the more i am convinced of it.  they don't have a clue what being a daddy means.  even those that have fathers - don't have daddy's.

after seeing me kiss jake the other day, one of the boys (who has a mom & dad - a better situation than most) told me that he doesn't remember his dad ever hugging or kissing him.  my heart broke.  me kissing my son made him reflect on the fact that he'd never known such affection in all his life.

i'm sure the way that me, mynor, and paul are with our own kids must seem bizarre to them.  this picture kerrie snapped today during varsity practice says it all!

example is so much stronger than words.  i am thankful to have 2 great men/fathers/husbands to work alongside - giving the boys the daily examples they need in their lives. 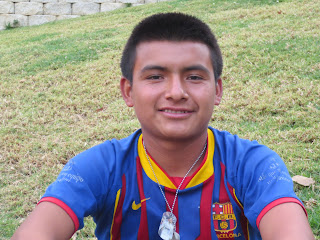 wilmer is 16 years old, and has been the "man of the house" for most of his life.  his dad took off when he was little.

he has been with us since we opened the doors of the boys academy, and i've known him since he was around 12.

he has almost quit the academy 2 or 3 times.  not because he wants to - in fact he's one of our most loyal Rhinos.  but he has tremendous pressure to be working to help his family.  each time, we've convinced him and his mom to let him stay - that the long term benefit will be greater.  occasionally we'll give him some work so he can earn some money.

wilmer texted me a message to my phone a couple days ago that left me in tears - and encouraged to keep doing what we're doing.  it reminded me that God is working...

"Hi brother Brock.  Do you know something?  For me, you are more than a friend. The truth is, for me you are like my dad.  I have never known the love of a father.  But now i am learning what it is.  Thank you, dad.  You are always in my heart.  You can count on me for anything.  I love you, dad."

re-writing his message in english... it is even more powerful to me than when i read it in spanish.  this comes from a 16yr old who has had a very rough life.  he has grown up in an extremely macho street-culture.  but his heart is softening.  praise Jesus.

i am reminded of the scripture that is on the wall at the entrance of the academy:

"Let us not grow weary of doing good, for at the proper time we will reap a harvest if we do not give up."  Galatians 6:9

please be in prayer for us as we have been focussing on sexual sin and pornography with the boys during daily devotions.  God has brought this to our attention recently with the several of the boys.

living in poverty does not protect a young man from this powerful attack of the enemy.  it finds a way inside homes by way of videos, magazines, etc.  with not much else to do in a poor rural village, it can be a captivating way for a boy to pass the time.  meanwhile, the awful darkness is infiltrating his heart with images that are impossible to wash from his mind.

i am thankful to be working with two men who i love and trust.  together, mynor, paul and i are hitting the subject matter head-on.  nothing is off limits.  boldly open and honest, the way it should be.

at first, the boys thought we were crazy.  no one talks about this stuff here.  in a poor legalistic society, you keep your junk to yourself.  you pretend all is well, always.

by the end of the 2nd week, all of the varsity boys have admitted they struggle with this.  they are talking, sharing.  the holy spirit is working.  satan must hate it.  darkness coming out into the light...

saturday morning both rhino teams (JV and varsity) had games in the city.  after arriving home, with all 30 boys showered and gone, the quiet afternoon lulled me to sleep on the couch.

until the phone rang.

it was my friend donald.  donald and ruth are our closest friends out here in the village. we love them, trust them, and love their kids like our own. a couple years ago we had the honor of being asked to be their kids' "padrinos" (godparents).

the call was to ask for a ride to the hospital.  one of their 4yr old twins, paula, was having severe stomach pain. i didn't have a car available, kerrie had gone somewhere with my daughter, and paul was gone with their car.  so i offered to call dr. carlos and have him come check her out.

i fell back asleep.

the phone rang again, about an hour later.  it was dr. carlos.

"brock, there is nothing i can do. she needs to get to a hospital or she's going to die."

i literally thought i was in the middle of a nightmare. "what?  i dont understand. didn't she just have a stomach ache?"

turns out she had such a bad case of amoebas, her intestines had swollen to the point that they were on the verge of exploding.  dr. carlos had seen it before. her intestines had formed a knot in her stomach so large that he didn't think she'd live another day.

as i spoke with the doctor, kerrie pulled into the driveway. within minutes (although it seemed like hours), paul and i were at the hospital.  we prayed.  donald cried.  paula sat calmly the entire way without saying a word.

i coached up donald as best i could on how to deal with the administrators at the hospital. the place is chaos.  packed with people, its not uncommon for people to die in the waiting area.

donald and i exchanged text messages throughout the night.  by morning, we received news that she had been given a treatment that forces the amoebas to pass in your bowel movement. if its too late, the amoebas won't pass. if its not too late, they'll pass.

they started to pass - by 8am she had passed 4 of them.  ruth described them as "enormous".  i cant even imagine...

bacteria.  dirty water.  unsanitary living situations.  its an enemy that can seem too big to even attempt to fight against.  but we will keep fighting. little by little, one person at a time.

we praise God for sparing paula.  he answered prayers and protected her.  thank you Jesus.

update 3/11:  the entire family is on medication to force out the amoebas.  paula has passed 8 of them - which are now the size of giant worms between 8 inches and 1 foot long.  her twin sister has passed 15 of them.  the other girls have passed a few as well, and donald (their dad) is also passing them.  ruth told us that the girls scream "snakes!" when they are going to the bathroom.

this entirely family is extremely sick.  people here deal with these things and don't do anything - they just push through.  i am speechless.  how many more in the village are sick like this?  most?  all?