thanks to some great people who help make it possible, we are able to take the boys on monthly excursion.  i've talked about these before in my blogs so i won't repeat everything about them here.

some great memories, learning opportunities, bonding moments, and just mind-blowing experiences have happened on these excursions!

all you have to consider is where these boys are from to imagine how crazy playing paintball or racing go-carts would be! 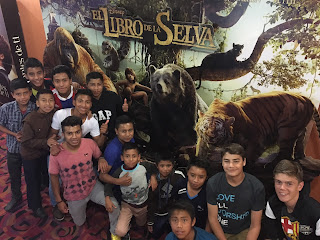 shoot... for jason and antony (two of our new boys this year) just getting on the escalator at the mall yesterday was a rush!

yesterday we took the 15 boys who had earned the last excursion to see The Jungle Book in 3D.  several of the boys had never been to a movie before!  they kept reaching out to try to feel the image on the screen, and taking off their glasses to try to figure out what in the world was going on...


we are so grateful to be a part of these boys lives.  much of what we do centers around teaching, discipline, parenting, and training.  so when we get the opportunity to get them out of the village to have some fun and experience new things it is always such a special time.

the thugs of BV

the men here are absolute jackasses.

sorry if that sounds strong, but i am just that mad.  the apostle paul used harsh language when he was justifiably mad...  so i think i'm ok here.

i've been in guatemala 8 years this august.  been working/living in the village of Buena Vista almost that entire time.  and other than our older rhinos or graduates, i've yet to develop a real friendship with a man that i can say i truly respect.

is that not insane?!  its not like i don't try!  i am out in the village constantly - serving, helping, caring and meeting needs.  through 12x12 we have built 200 homes.  we have met the medical needs of hundreds if not thousands.  built countless kitchens, stoves, and bathrooms.  we give away food baskets like pieces of candy.  we build playgrounds, fix public roads, paint public places, pick up the trash, build retaining walls, pipe-in water for those who don't have it, and help people start businesses.

and i'm not even mentioning what we really focus on!  we treat the rhinos like our own kids.  we teach them the bible, feed them, clothe them, and take them on amazing monthly excursions.  we cover everything they need and we tutor them daily.  we disciple them day and night.  we work to get passports and visas and take them to crazy places to play soccer (honduras, new york, florida!).  we love and care for them as if they were our own.

did i pat ourselves on the back enough?

hang in there with me...  because that is not at all my point.

even though i know better, it does make me mad that in light of all we've done for this village, not one man has been compelled to be supportive or even appreciative.

i want to say this right.  i am not upset because i want the men to like me or thank me.  i am happy to consider that a loss for christ.  despite the above rant, i don't need to be liked or appreciated by the men here!  i guess "how they treat me" (in light of all we've done for them and their families) just helps me put it in perspective sometimes.

what really angers me is how the mean, greedy, deceitful men of Buena Vista control the "pulse" of the village.  it dominates the women and infects the kids.

the issue is genetic.  its so much a part of who they are, trying to change it is like trying to grow a tomato from a rose bush.

its like selfishness, corruption and dishonesty are hereditary traits...  deeply seeded in the dna, and seemingly impossible to root out.

it will be impossible to capture 8 years of experiences with a couple short examples, but here's just a few from the last week!  i'll leave it up to you to imagine how many of these have happened over the coarse of our time here...

1- mynor and i walked up to the "cancha" a few days ago and saw that the playground was completely destroyed.  this was a $10,000 playground project that we did with the schmidt family several years back.  it included a huge commercial playground set, multiple swing sets and monkey bars, basketball goals, etc, etc.  for 5 years this has been a place of pure joy for the kids of BV!  well... the men of the community, in an effort to improve their soccer space, tore it all down.  and i mean destroyed it.  its literally in pieces.  now its a place where they drink beer and play cards.  no more kids swinging and sliding...

2- after years of dodging the broken metal grate and shredded manhole cover on one of the main roads in town, we decided to fix it ourselves.  (the mayor of 2 different administrations has said they would do it "soon".)  the project cost us about $500.  once finished (last monday), the contractor we hired said it would take about 8 days to cure, so we blocked the road and put up yellow police tape (approved by the mayor).  about 5 days later, the local men of BV (the "leadership committee") decided to move the roadblock on their own, and open the road.  when i heard about this, i went to the "auxiliary building" where the committee hangs out, and i asked about it.  they all denied it (which is a classic coward move by the men here).  finally, after i pushed and told them that i knew they did it, they expressed their anger at me for closing the road in the first place.  i showed that i had written permission from the mayor, but more importantly that i had funded the project myself for the benefit of the community...  and that it would only be a couple more days and the road would be ready.  they were furious with me...  literally looking at me like i was their enemy!  keep in mind these are men that i know, and have done countless things for them and their families over the years.

3- i was sharing these stories with one of our graduates, allan.  he began apologizing, and assuring me that it was not me, or anything personal...  that this was just how the men are.  he shared with me that ever since his dad was paralyzed in an accident several years ago - that NONE of his friends or family has come to visit him.  not even his dad's own brothers or sons!  he explained to me that the men here only care about "what they can get", and once a person is unable to benefit them, they might as well be dead.

wow.  hearing it put that way from a young man, born and raised in this village, helps put it all in perspective.

several of the older rhinos have told me before that their dads don't want them to be educated or get a good job.  the reason?  because it will make the dad look bad if the son is more successful than them.

numerous times i have seen the men do anything possible to keep their son, brother, neighbor, or even parents down.  they make fun of you if you get a better job, or have to wear a "uniform" to work.  i've seen young men quit their job that makes 3x more, and return back to work in the fields, just because the men were making fun of them.

so...  other than being utterly disappointing and depressing :) what does all this mean?

for us, it reminds us why we are here.  maybe we can't change all the grown men.  (we won't give up on them - God can do anything.)  but overall, we're reminded to keep pouring into the boys.  they will soon be men.  they will be the dads and husbands.  they will be the "leadership committee".

i am encouraged by several of our older rhinos.  i see allan and wilmer running this place someday.  they will be the examples to the boys, and teach them to be kind, generous, godly men.

and honestly, they will be able to do it in a way that i never could.  because after all, they are men from Buena Vista.