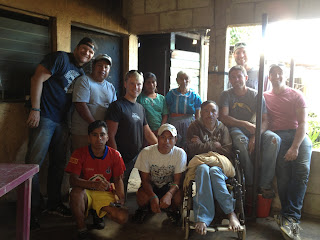 maximo lost the use of his legs over 30 years ago.  as if extreme poverty isn't bad enough...  he has endured it for most of his life in a wheelchair.

i met him about 4 years ago.  he told me he did wood work, and showed me some cross necklaces he had made.  i started selling them in the teamhouse for him.  he was never satisfied.  honestly, he was a jerk about it.  his expectations were never met.  he always complained that people weren't buying enough.  after a while, i stopped selling them.  i was tired of his attitude and it was becoming too difficult to work with him.

after that, every time i saw him it was awkward.  sometimes he'd give me a gruff head-nod, but usually he'd just give me a stare.

until a couple months ago...  i was walking by his house and i heard him call my name.  i stepped inside.  he said "look at my roof."  i looked up.  it was super old, full of holes and rust.  he said "i know you'd never do this for me, but i thought i'd show it to you anyway."

i responded, a little frustrated, "so... are you asking me a question maximo, or did you bring me in here just to tell me that you already know i won't help you?"  he went on to say that he was embarrassed to ask, because he doesn't like asking for help.

i told him that i would be glad to share about his need and we'd see what happens.

several weeks later, we had some friends coming in for a visit from occ church in jax beach.  when i mentioned the whole story to my friend derek, he responded with excitement:  "i love it!  giving something to people who don't deserve it!  i know i don't deserve what Jesus did for me.  that's what true grace is all about!"

with that, i started ordering materials, and made preparations for maximo's roof job.

as we spent a full day roofing maximo's house, something happened that i will never forget.  maximo was sitting in his wheelchair out in the middle of the street, watching us work.  a man was walking towards him with a horse loaded up with firewood.  as the man drew nearer, he was saying "move it maximo...  move it maximo..."

maximo was trying to spin around in his chair so he could get out of the way, but the guy kept coming - until he purposefully banged into maximo's wheelchair, sending it into a 360 spin.  it could have easily knocked him over.  as the guy kept walking, he looked back at maximo and said "i told you, ass."

as i saw the expression on maximo's face, it left with me an empty feeling in my gut.  i had been quick to right off maximo as a mean old grump - and unwilling to empathize with his situation.  in his environment, his culture, he gets written off as a useless cripple.  probably even considered worthless and getting what he deserves.  sadly, in communities of extreme poverty, there is a tendency to think that "good people are blessed, and bad people are punished."  i felt like God was giving me a glimpse of maximo's reality. 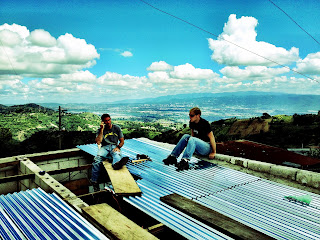 by the end of the day, maximo had a new roof.  i will never forget the moment that he began crying.  he shared how he and his son had talked about saving up one sheet of tin at a time until they could replace the roof.  he said they both knew they'd never be able to do it.  he praised God for touching our hearts.  tears streamed down his face.

the next day we brought a birthday cake for his mom, and a group picture from the day before.  we sang happy birthday, laughed and ate birthday cake.  he asked that everyone write their names on the back of the picture so he could continue praying for everyone by name.

the sweetest, most amazing thing imaginable.  none of us deserve it, yet through Jesus it is available to us all.

i can be such a dirt-bag, and God still extends it to me.  out of thankfulness for that, i want to be better at extending it to others.