how should Christians handle politics, racial tension, and covid-19? 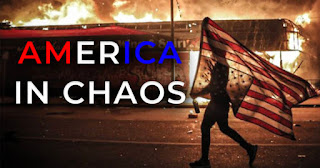 the combination of racial tension, covid-19, and the upcoming presidential election, has led America into complete pandemonium.

Christian or not, politics seems to be the filter for everything.  Satan is working overtime to assure that every angle on every conversation is steered by politics, and firm loyalty to one side or the other.

it's crafty on the enemy's part, as it keeps everyone mired in the world; eyes fixed on temporal problems and temporal solutions.  it's why these things always lead to "get out and vote" movements.
the logic suggests that electing the right candidate will solve everything.  but it never does.  why?
because the true problem has been the same since the beginning of time: our own sin.
the only solution remains the same too: Jesus.  (1 john 2:2)

if i'm not careful, i start to drift down that same cultural/political train of thought.  my daily time abiding in God's word is the only way i can maintain a kingdom perspective.  there's a reason its called "daily bread" for Christians.  we starve without it, and end up feasting on the junk food of this world.

--------------------
i don't claim to be a special voice on all of this, but i do want to share some thoughts rooted in Philippians 2:12-14.  as i studied it recently i felt it couldn't be more apropos for today's climate.  i've separated the section by it's commas so you can recognize the beauty of each line:


"Do all things without grumbling or disputing,
that you may be blameless and innocent,
children of God without blemish in the midst of a crooked and twisted generation,
among whom you shine as lights in the world,
holding fast to the word of life..."

the middle line (in orange) identifies the scenario: Christians living in the midst of a crooked and twisted generation.  the surrounding 4 lines tell us what to do about it.


but before we can dig into "what to do about it", we have to establish that we too are living in a crooked and twisted generation.  honestly, i'd call "crooked and twisted" (politically and ideologically) an understatement!  in fact, the two parties that supposedly work together to form governance seem to have both lost all sense of reasonableness.

many on one side are refusing to wear masks, rejecting data and safety protocols, and running with every covid-19 conspiracy theory out there.  some in this camp would say systemic racism isn't even real, and racial injustice is just an excuse that black people use.  despite claiming to be the party for evangelical Christianity, their favorite "conservative personalities" influence their worldview much more than their bibles do.  sadly, they justify their own hate and judgment, based on the fact that the extremists on the other side have gone too far.

on the other side, you've got violence, rioting, and pure mayhem being justified as "protest."  a culture is forming that bullies people by saying "you must agree with every single thing we stand for, or else!"  for example, while the phrase "black lives matter" is of course true (and a worthy mantra right now), the organization itself has other objectives that are questionable, to say the least.  many of which are not even race related.  yet if anyone dare speak about it, or even hesitate to join the movement, they're tagged bigot, racist, sexist, or homophobe... then annihilated via social media, and rejected by all.


several factors contribute to this madness.  divisive leadership on both sides.  biased media on both sides.  unwillingness to empathize. fear of retribution (cancel culture), and much more.  as a result, the valid concerns coming from one side will never be appreciated by the other.

it's a true impasse.  gridlock of the worst variety, with nowhere to turn around or free things up.


as Christians, what are we to do in such a crooked and twisted generation?  which side do we support?  what if there's truth on both?  and lies on both?  how do we form our viewpoints on these matters, and handle these conversations?

first, we have to change filters.  toss out the political and cultural filters, and upgrade to a biblical filter.  lets go back to Philippians 2:14-16, starting with the last line:


holding fast to the word of life...

in order for a Christian to live in this world, the bible must be our source for everything.  God's word has to be the influence forming ALL of our opinions, leading ALL relevant conversations, and shaping our ENTIRE perspective.  it is the living, breathing word of God - always true, always right, and always giving a better way.

when we know the Word, keep to the Word, and abide in the Word, our opinions and actions become like Christ!  this is what prevents us from conforming to the crooked/twisted thinking of the world.  as the Christian grows in knowledge and wisdom, devotion to a political party or even a "nationality" begins to seem trivial by comparison to devotion to King Jesus.

Do all things without grumbling or disputing,
that you may be blameless and innocent

when we abide in Christ and grow in knowledge, we begin placing our identity in Him alone.  as He conforms us into His image (which He promises will happen!), grumbling and disputing become less natural of a response to our circumstances.  eventually our combative and argumentative nature gets replaced with a genuine desire to be blameless and innocent, which flows from humility.

among whom you shine as lights in the world
finally, as we abide in His word, and put on His character, we get to shine Him. the ability to shine Jesus is especially important during dark, chaotic, confusing times like these.  oh, how this crooked and twisted generation needs the light of Christ!

what made Jesus shine uniquely bright was his perfect balance of Grace and Truth. as we grow in those characteristics, we gain the ability to better discern right from wrong - and then lovingly engage. through this, God gives us the opportunity to stand out from the world (shine!)... by not fitting perfectly into any worldly "camp"...  and showing political and cultural objectivity based on commitment to biblical truth.

you can read more about replacing your filter in colossians 3:1-17.

returning to the current state of chaos in America...

to Christians on one side: if racial injustice doesn't truly bother you, something is wrong. a Christian should be appalled by any partiality, for God shows none (romans 2:9-11).  try to understand the reality of systemic racism, and empathize.  it's good to be patriotic, but not without appreciating how the process-out-of-slavery left huge hardships for black people, some that remain to this day.  here's a great short video to learn more, by American icon, Phil Vischer (creator of Veggie Tales).  trust me, he's brilliant :)

regarding both the racial climate AND the politics surrounding covid-19, measure your arguments (and level of passion) against scripture.  aim for empathy and understanding.  pursue humility and objectivity, and ask God to help you recognize when your news source - or your president - might be wrong.

to Christians on the other side: be willing to call out the serious blemishes in what's going on.  an important cause doesn't justify all means (violence, bullying, cancelling, etc).  don't dismiss/shame people who might be wrestling with different nuances of it all.  and be careful not to let the bad apples ruin the whole bunch, so to speak.  most importantly,  if you feel oppressed or persecuted, remember the Lord is for you (psalm 9:9). that should free you up from having to fight so hard, knowing that He fights for you.

you have a captive audience.  in the long run, it will go to waste if the most audacious, unreasonable voices steal the limelight.  separating from the extremists, and leading a shift of tone towards considerate dialogue, could lead to monumental and overdue change.

we don't need more political banter.  grumbling and disputing isn't a way forward.  yes, vote... and yes, defend biblical truth.  but as Christians, we must realize that in the end, Biden, nor Trump, nor Perfect Candidate C, is going to make everything better.  the magnitude of the situation, and our own human depravity, makes "electing the right candidate" far too simplistic.


what's needed more than ever are brave Christ followers, shining like lights in a crooked and twisted generation.
"God, i know the only way to shine your glory in this world is by abiding in you, knowing your word, and being brave enough to live it out in unashamed obedience.  convict me of my own sin daily so i can repent, be renewed, and keep fighting the good fight, for your glory alone."

Thank you, very well said! "Let the redeemed of the Lord, say so".