please pray with us for jose 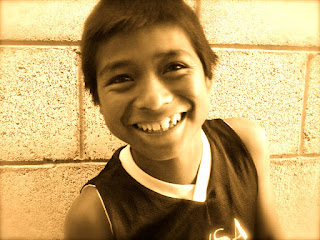 when he first arrived here, i would have never thought he'd make it a week. a rough kid, he raises himself on the streets. i've known him for almost 4 years now. he had always given me trouble in the past. i just knew that the rules, discipline, structure of the boys academy would be too much. it would be too hard for him and he'd quit for sure.

the first few months when something would come up stolen or broken, i always figured it would be him. it never was, not once. while the first few weeks were definitely tough, he soon turned a corner and began to flourish. eventually he became a leader. loyal, punctual, obedient, and loving. it was an amazing conversion.

today we experienced one of our more heartbreaking moments here at the boys academy (and we've had lots of them). jose hasn't showed up for almost an entire week. at the end of the day, we went and tracked him down and brought him back to the academy to talk.

it wasnt long before jose - a tough kid who i have never seen cry before - was sobbing. the entire conversation, about 45 minutes to an hour, he was crying hard, fighting to even talk over the tears.

he shared that his brother is forcing him to work full days out in the field. "he says i am a man now and its time for me to help him pay off his loan", he said as he sucked back tears and tried to even breathe.

jose is 14. he thought he was 12 until we took him a couple months ago to track down his birth certificate. he is just a boy.

please pray with us as we plan to go see his brother this sunday. these are the situations that present all kinds of challenges. the locals can get the idea that we're trying to tell them what to do, trying to control them - how they parent, or what's best for their families.

that is not the case at all. we have always been sensitive to this and respectful for decisions that the families make.

but we want to give these boys a voice, and we will fight for injustices that are unreasonable. jose is a kid, he is not a grown man. he is working full days under the sun in a field. when we asked him what he is earning he said they haven't told him yet. he is being abused, taken advantage of to say the least.

sunday we will go speak with his brother and his mom (who doesn't have a lot to do with him) in an effort to get jose back. praying the holy spirit will fall on us as we speak. that he will soften hearts, and help us get this kid back where he belongs - learning, growing, leading, and thriving.
Posted by brock at 11:10 PM 2 comments:

what did you eat today? 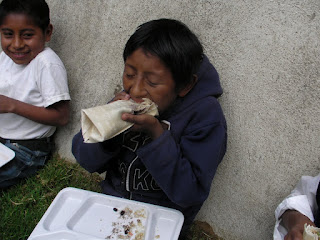 would you be willing to write down everything you ate today? i did it today... and it was pretty humbling. i dont consider myself a huge eater, but when its all listed out like that... well, i ate a lot today.

yesterday we opened the Kids4Kids Training Table - a feeding program that will feed all 30 rhinos a nutritious meal every day.

this may sound crazy, but kerrie and i agree that it was one of the best days of our lives!! maybe we just weren't expecting it, but it really hit us hard.

these kids dont eat much. some are 16 and 17 years old, and after studying and training at the academy, told us that they hadn't eaten anything yet - all day. before we made the announcement (they didn't know - it was a big surprise), we asked them what they had eaten. it was tough to hold back tears. when we told them about the feeding program - that they would all receive a delicious meal every day - they could not believe it. their reactions were priceless.

another thing that makes this feeding program special is that it is being supported by kids. the kids of savannah christian church bring in their weekly giving... and ultimately their money lands in guatemala where we buy 600 meals a month to feed these boys. kids helping kids. gotta love that.

please watch this short video to get a glimpse of the miracle... and join us in thanking Jesus for this very special opportunity.
Posted by brock at 10:03 PM No comments: