don't let the tough-guy fool you... josue has a heart of gold

this was a reason to celebrate.

carlos (18yrs old) recently graduated from a complete year of english school.  this, after struggling midyear and almost quitting.

axel recently passed his driving test and received his license.  the first person in his family to ever do so!

and josue (many of you know him as "abuelo") just graduated from his 8th grade year - at 19 years old.

a little more about josue...

josue has carried a man's load ever since he was a boy.  he finished 6th grade, and started working full-time as a field worker.  his childhood was over.  at the age of 12,  a lifetime of working 10 hour days in the fields had begun.

that was the day that he showed up for try-outs at the boys academy.

he had heard about it from a friend.  he didn't know what was going on...  in fact, he thought it was just a weekend tournament.  a chance to play some soccer before going back to work on monday.

josue never went back to work.

he quickly became one of our leaders and most trusted students.  this year, he was co-captain of the varisty team (with carlos).

as year 2 in the academy started, after much discussion and prayer, josue started a weekend program that would allow him to get his "basico" degree (the equivalent of jr. high).  we all knew it was going to be hard.  having just learned how to read and write, i was concerned that we were moving too fast, possibly setting him up to fail.

fast-forward to the present day.  we invited these 3 young men - our leaders at the academy - out to dinner.  they weren't sure why, but it was "dinner in the city" so they were all pretty excited!  we went to TGIFridays.  a big-time place for these 3 guys from buena vista!

when we got there, i shared with them what we were celebrating.  they were all thankful, and clearly excited to be being recognized.

but before i explain what "it" is, let me tell you one more thing about josue.  on the soccer field, josue is a beast.  he alone is the contagious confidence for our entire team.  he holds this role for several reasons.  my favorite being, that when we show up to play against teams that are twice our size (which is almost always), josue typically puts a guy on his back within the opening minutes - just to let all of our boys know that no one pushes around the rhinos.

josue has saved us from losing more games than i can even count.  he is a defensive machine.  his short, thick, compact physique is intimidating.  he's fast, and he loves - i mean loves - to check you with a body shot.

his undeniable toughness makes what i'm about to share that much more meaningful.

back at Friday's, after i shared why we were celebrating, walda handed josue his final report card for his 8th grade year.  he hadn't seen it yet.  in fact, up until this point, he wasn't even sure if he had passed or failed.

he was going to graduate 8th grade.  more than that - and to his surprise - he passed every single class.

there in Friday's, as he scanned down his report card, josue lost control of his emotions.  our 19 year old tough-guy captain, who has worked a man's job since the age 12, began sobbing tears of joy.

and he didn't just cry...  he wept.  as i watched what was going on, i wondered how many emotions, thoughts, and feelings he was going through.  the tears ran down his face and fell right on to the report card.

in that moment there was much more going on than just being excited about the year's grades.  it was clear that this accomplishment had much more meaning than that.  the scores on the card weren't numbers.  they were statements.  statements that said:

you can do it.
you are smart.
you can do anything you set your mind to.
the sky is the limit.
chase your dreams.

his report card give josue the assurance that he can do anything, and the hope for a brighter future.

he tried, through his tears, to thank all of us.  we all hugged.  despite growing up in a rough, macho culture, his buddies didn't laugh.  in fact, they shared tears with their friend.  this was one of the most raw, beautiful, and honest moments i have experienced with the boys.

many thanks to walda, kerrie, jessica, and denea for all you have done to prepare josue in the classroom.  and to all the men who have been a part of helping him become a real man.

and to josue...  thanks for being the best example of what it means to be a rhino.  te amo amigo.

a day of christmas "firsts" 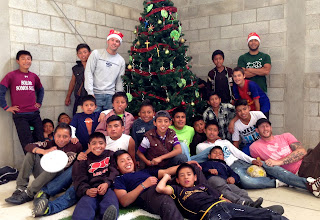 we had the idea several weeks ago.  to give all the boys some spending money, take them shopping, and ask them to spend all of it on another person.

one of the coolest things we've ever done.

we received a donation from some friends in order to make it possible.

it turned out to be way more special than we had anticipated.  we couldn't have imagined how much the boys would enjoy buying for one another.  they were careful and creative in the items they chose.  they had a blast.

every single one of them that i asked told me that they had never bought a christmas gift for a friend before.  i think thats what made the event so special for me.

then we came back to the academy to decorate a tree and wrap gifts.  another "first" for all the boys.

WATCH THIS SHORT VIDEO FROM THE DAY OF FIRSTS!!