in a battle - need some prayers!

it may sound cliche, but i liken our work here to a roller coaster ride.  right when things begin to move along smoothly, then comes that slow awkward climb upward - where you brace yourself for the chaos that you know is about to take place.

that chaotic, scarey, downward drop is exactly where we are.

a few months ago, we had an eruption of boys coming to faith in jesus.  genuine life-changing decisions were made, sincere brokenness and confession led to decisions to accept Christ and begin a new life in him.  we celebrated together as a ministry, and began a specific discipleship effort to prepare these guys for what lies ahead. 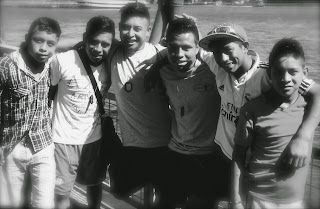 since the explosion of decisions for christ, its been an absolute battle. as we dig deep with each new believer - in an attempt to teach them about true grace and forgiveness - we are finding the dark stains in the depth of their hearts that God wants to heal.

as these things get revealed in the life of a teenage boy, the response is almost always embarrassment, followed by denial.  one day the heart is soft and workable, and the next day hard as a rock.  one day he's leaning on us or his teammates for support, the next day he's a no-show and out in the street telling people how this academy is a joke.

the process is brutal.  i remember how hard it was for me personally when i confessed my reprehensible sin - when my darkest secrets were brought into light.  i remember feeling like i was barely hanging on.

when you are going through it, it is almost impossible to foresee the goodness of God's grace that awaits.  no matter what anyone says, it seems like the focus is on you - on your sin.  at least that is what the enemy wants us to think.

so we repeat to the boys over and over - that if we confess our sins, He is faithful and just to forgive us and cleanse us from all unrighteousness.  amazingly, God tells us in jeremiah 31:34 that he will not only forgive us, but actually erase our sins from his own memory!

please pray for the boys and for us when you can.  i will admit it is hard to "stay up" all the time.  yesterday one of our most loyal, favorite rhinos who has been here from day one, told his friends out in the street that we were all a bunch of "expletives" and that he was turning in his gear.  2 others have seemingly quit in the last 2 weeks.

God reminds me that everything is ok.  that direct attacks from the enemy is the best indicator that his spirit is at work in our ministry.

but even though i know it to be true, i am human.  i get caught up in each case and each detail.  i get down... i stress... i over-think... i try to solve everything.

we appreciate your prayers as we work to transform these boys, and this village, in the name of jesus.

update:  since posting this a few months ago, much has happened.  we did lose 2 boys who quit.  but we have made much progress with others.  some new decisions for christ have been made.  others have made progress with their situations.  God has been good to point us to his word where freedom is promised.  some hearts remain hard.  but our team on the ground felt your prayers as we were given new strength, and new insights from scripture.  thank you!!!

i sit here typing this blog one day after sending out an email to friends and family titled "the boys need your help!" 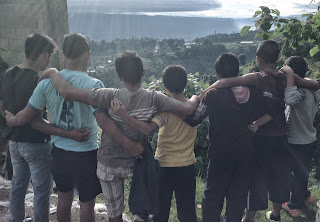 the email was the same as the blog below - explaining that we still needed 18 boys sponsored for the international soccer tournament that is just a few months away.

i explained in the email that for the other teams traveling from all over the world, each kid has parents to simply cover their expenses.  the challenge is that our boys' parents can't afford to buy them sufficient food and clothing - much less send them to another country for an inter-
national soccer opportunity.

makes me emotional as i scroll the page, connecting in mind each sponsor with the boy they are sending to the tournament.  they deserve this opportunity every bit as much as any american kid who just so happened to be born into better circumstances.  but it wouldn't be possible without the help of so many...

thank you everyone for making it happen.  you will be hearing from the boy you sponsored soon.

part of our job here is to make sure these guys know how loved they are.  my prayer is that they are captured by the love of Jesus as they realize how many people care about them.  how quickly they all got sponsored is a huge example of that.

the rhinos need some help!

click here to see which boys still need a sponsor 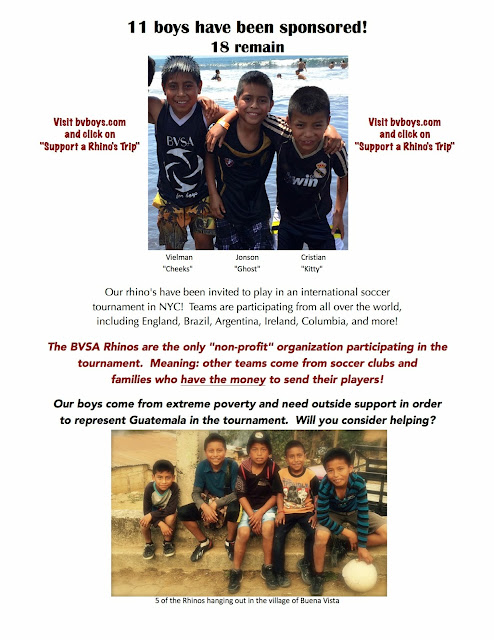 click here to see which boys still need a sponsor

house of their dreams 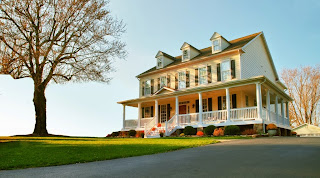 i recently heard the song "house of their dreams" by casting crowns.

the lyrics tell a powerful story of a family who, by outer appearances, seem fine. but in reality they are drifting apart, absorbed in their own worlds.  dad is dedicated to climbing the corporate ladder, mom trying to stay busy and stay in shape, son is off at college, and daughter is struggling with her identity at a teenager.

the isolation, each on their phones, computers, social media, etc... has led them away from things that matter most.  they spend most of their time alone, in their own rooms, but hey... at least they're in the "house of their dreams."

great song...  here it is if you want to check it out.


generally speaking, i think there are only 3 responses a christian man/husband/father can have after hearing this song.

1 - genuine thankfulness...  relief that your home is not like the one described in the song. thankful that your family is living for things that matter, serving God and people, and not chasing earthly possessions/ambitions.

2 - humble conviction... admission that the song in some way reflects your home, and recognizing the need to confess and refocus.

3 - defensiveness/denial...  justification as to why this is not you.  explanations of how the corporate climb and/or the constant self-focused activities of the family can all be managed - how everything is fine, its all about the "healthy balance", etc, etc.

for me personally, i am so thankful for where we are as a family, doing our best to follow Jesus.  are things smooth and easy?  no, they aren't.  do we have a big savings account, and retirement plan?  nope.

but we are focused on eternity instead of earthly.  we know our reward comes later.  we are content, at peace, and full of joy.

listen to the song.  which one are you?

a few recent updates and pics

i don't normally let a month go by in between blogs.  its certainly not because things are quiet here!  much the opposite actually - its been a very busy month!  going to share a few quick updates below for anyone interested :)

we were able to travel to idaho to see my grandparents, who are in their late 80s. we haven't been able to get there as a family in 5 years, so this was a very special time together.

my grandpa was a hard working farmer his entire life.  he now has parkinson's disease and lives in a home where he can get 24-hour care.  he's a complete riot, and still manages to make everyone in the place laugh.  the home is only a mile or two from their house, so my grandma goes to spend time with him there every day. 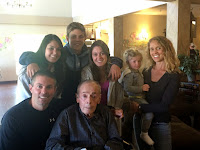 my grandma is amazing!  we were able to share her 86th birthday with her while we were there.  i've always known my grandma was a saint... but being there this time truly reminded me how special of a lady she is.  once a week, she comes into the nursing home and leads a bible study and worship time for everyone there (she still plays the piano beautifully).  in addition, she leads another bible study and worship time at her church on sunday afternoons - mostly for the older folks who miss singing old hymns!

the wonderful part is that she devotes much of her life to these studies.  she knows that God still wants to use her to help these people get to know Him before its too late!  she literally spends hours every day reading her bible and preparing.  this amazing farmers daughter and farmers wife could easily be playing bingo all day, or vacationing on sunny beaches as her time winds down... but she knows what a waste that would be.  she is truly an wonderful person and inspired kerrie and i tremendously while we were there. 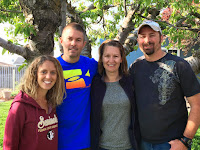 we were also able to see the young family in washington while we were in the northeast!  we started home-church in florida with the youngs (and others) many years ago.  it was great to catch up with rich, brenda, and their 4 handsome boys!  my highlight was when rich performed an interpretive dance to a michael w smith song.  if you know rich, you know why that is so funny... 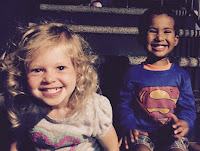 so fun to watch these 2 grow up together.  sometimes i wish arranged marriages were still appropriate!  luci and noah love each other and can't get enough time out on the swingset together.  many memories (and hundreds of pictures!) have already been made, and i can't even imagine how many more await.... 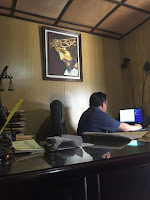 with the help of some friends back in the states, we were able to purchase some land recently for some local friends in need.  construction will begin soon on their new homes.  while at the closing on the land purchase, i was sitting in the office of my friend boris, who is a nearby attorney we have used many times.  as i looked at the painting on his wall it reminded me about something i love about central america.  here you are free to share your beliefs without any ridiculous outcry from the naysayers.  while guatemala is full of corruption and broken systems, religious freedom is an area that is actually refreshing... 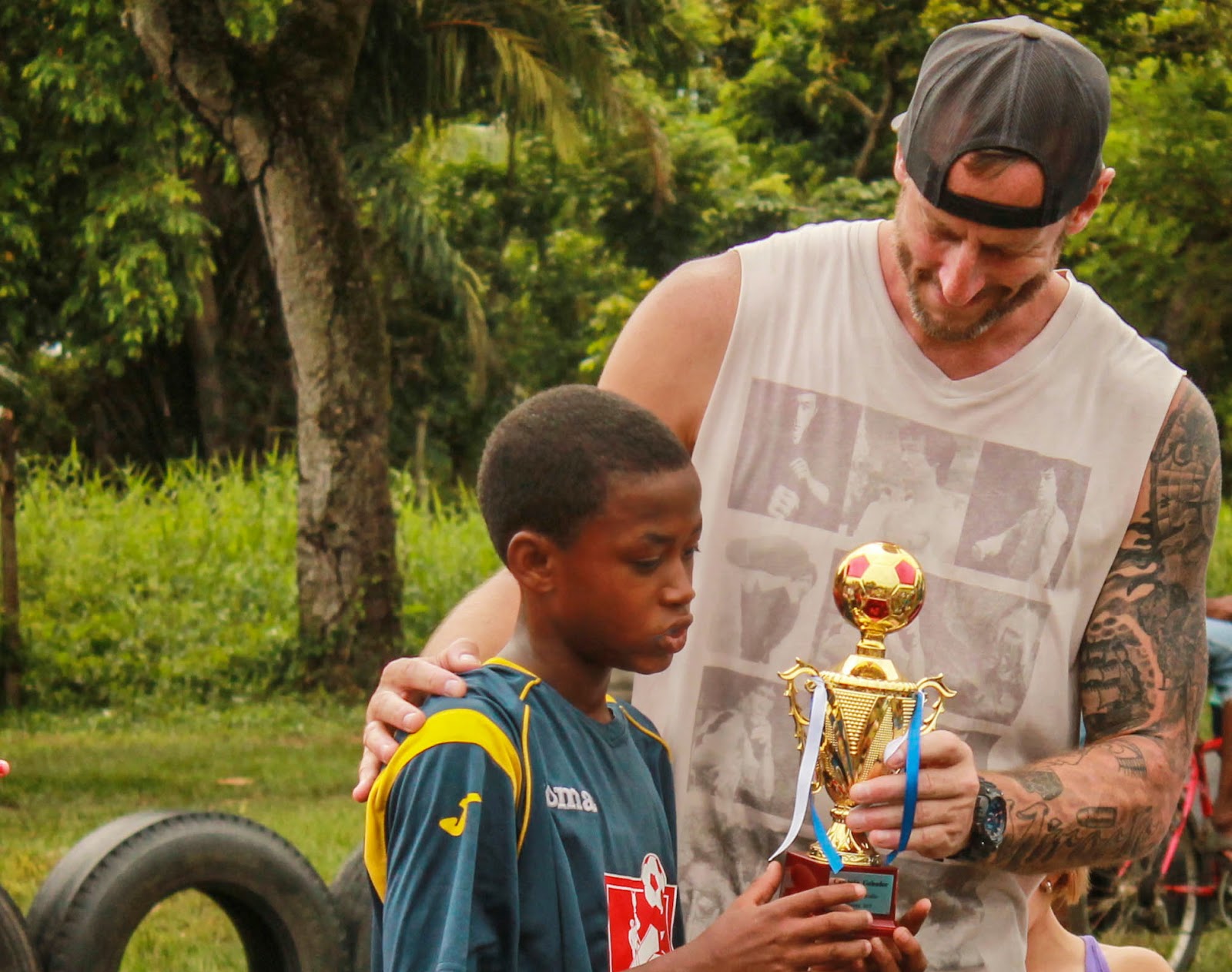 we just returned home from honduras, where BVSA is planting another sports academy for boys through the davis family and axel.  my mind is spinning from all that we saw, learned, and experienced.  but most of all, i feel so proud of our friends for how they are adjusting and working hard toward the mission.  in only 3 months, they have developed many relationships and have become well-known in the community.

while mynor and i were there last weekend, the they hosted a tournament for the boys ages 13 and under in the community.  8 teams full of kids showed up, despite an early downpour.  for me personally, it was a pure joy to watch paul and axel leading the tournament, while jessica and the kids ran around serving people and managing details.

travesia is another dark village where the men have led a culture into deep generational sin.  we believe that's why God led us there, and we are excited to be planting BVSA Travesia in honduras through the davis family and axel!