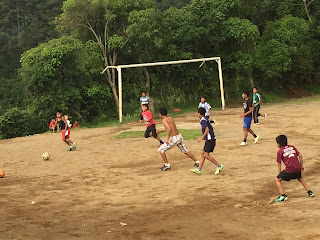 today was madness.  packing up a soccer team for travel might sound easy enough, but try 30 kids from an impoverished village in guatemala who have never packed in their life and don't even have an idea what the concept is.  trust me... different story!

after preparing a million things over the last several weeks, today was final check day.  this is one of many conversations from the day:

we are beyond excited to be traveling to the USA with a bunch of boys who, some of which, just this year left their village for the first time.  my prayer:  that God would use this trip to continue developing the boys into better men.  more confident men.  men who can change their village.  i don't know exactly how He will do that, but that is my prayer.

please pray for all of this if you can.  also for walda, who with her 2 babies will be manning the fort alone at BVSA for 10 days.  if you are anywhere near Jacksonville come out and support the Rhinos!!

Come out to Veterans Park on Fri-Sat-Sun and support the boys!

You can also come see the boys share at Emmaus Church
on Sunday, Sep 6th

And don't forget our event in the park on Labor Day,
Monday Sep 7th!


Come hangout, visit, play games with the Rhinos at Veterans Park
Stop by anytime from 1:00 to 4:30pm

we arrived at the US embassy of guatemala with about 80 people (rhinos and parents).  this year, they changed the rules - no one allowed inside except those applying for visas.

mynor tried to "imply" that he was one of the boys dads - no luck!  me and mark ended up going in through the "american citizens" line, and while inside we tried to keep an eye on the boys from the other side of the building.

allan and enrique were the first ones called up for their interviews.

i tried to go over to the visa interview room but they wouldn't let me in.  i argued that some of these kids were 9 and 10 years old, extremely nervous, and they needed their coach to help explain things for them!

no luck - the security guard asked me to leave. "but i'm an american citizen and this is the US embassy!"  nope...  i was asked to sit in the waiting area.

allan and enrique were in their interviews for what seemed like an eternity.  i could only see their backs.  my mind was going crazy, wondering what was going on.  (last year they had allowed me to do the first interview.)  i was certain... the longer the interviews lasted, the more likely they were having problems.  finally, allan looked back at me and smiled, as if to say "its all good."  a couple minutes later, enrique did the same thing.

once allan and enrique's interviews were finished, the rest of the boys passed through quickly.  all of the visa requests were approved!  which means, very soon we'll be boarding a plane with 30 BV boys - headed for the USA.  for some reason my mind is drifting - imagining 9yr old Bladimir on an airplane!  oh yeah... then there's 10 year old Jhonson who throws up every time he rides in a car much less flies in a plane.  uggh!!

i admit that just the thought of traveling with all 30 boys stresses me out!  but at the same time we couldn't be more excited!  what an opportunity.  and only 10 of them were with us on last year's trip...

THANK YOU for your prayers and support in making this trip possible.  despite the challenges i've mentioned in past blogs, these special guys deserve every bit of love and opportunity that comes their way.  and we know that God will use this trip in a unique way as he molds them into confident, exposed, aware, educated, and godly young men who will change Buena Vista!

HERE'S A FEW DATES TO SAVE.  PLEASE COME OUT AND SUPPORT THE BOYS!


all games are played at Veterans Park

Monday, September 7th:
Please come hangout with the Rhinos at Veterans Park!
Anytime from 1:00 to 4:30pm
*Feel free to bring your own lunch
*Drinks will be provided
*Bring lawn chairs
*End time is "sharp" b/c the fields are reserved at that time