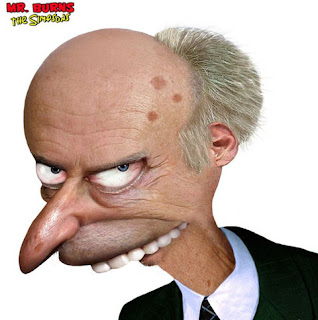 there's a guy in our village that the locals call "señor burns" - after the character "mr. burns" on the simpsons.  innocently enough, the guy does resemble mr. burns (pictured to the right).

but even innocent jokes can hurt.

mariano is a loner.  he is not from buena vista.  he moved here to live with his brother.  he says that the violence in the city got too intense, and his brother always told him that buena vista was a quiet, friendly village.

while mariano might describe BV as quiet, i dont think he would call it friendly.

we've been friends with mariano practically since we moved here almost 5 years ago.  no doubt he's unique... but we've always liked him.  he's quirky, but also pretty interesting and quite friendly.

it wasn't until recently that i realized how mean the people in the village are to him.

the topic came up in devotion time with the varsity boys yesterday.  mariano had stopped by to ask me to taste some of the pastries he had baked, as he's trying to start a business selling bread and cakes in the local market.  some of the boys had noticed that he stopped by, and i overheard some of the jokes...

as we discussed it freely, the boys shared about how rude, bad, and different mariano is.  "different" because he looks funny.  "rude" because when you greet him when passing him on the street he responds short and quietly.  and "bad" because he smokes cigarettes openly.

the conversation became what i am imagining will be the first of many.  we touched on judging others without knowing their personal stories.  we talked about how jesus loved on the down-and-outs and the marginalized.  we talked about how words hurt - how the things that people yell at mariano as he walks down the street could lead him towards depression and sadness.

every year since my kids were little, kerrie and i have challenged them to keep an eye out for students at school that are different, or left out.  their job?  to reach out, talk to them, learn about them, and make friends.  over the years, some of their closest friends were the otherwise "unpopular".  as they have gotten older, our hope is that it has become completely natural for them to avoid measuring people by their exterior and get to know people for who they are inside.

so i challenged the boys to reach out to mariano.  say hello, shake his hand, or ask him how he's doing.  find out something about his life.  who knows, they might just find out that he's not so bad, rude, or even different.