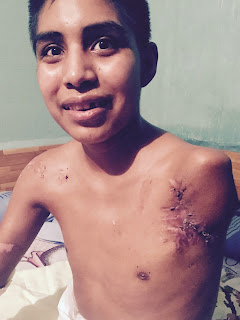 aldo came home yesterday.  it was special to be down in aldo's house, late at night with a bunch of the rhino's, when the truck arrived from the hospital.  about 10 of us lit up the dark path with our cell phone flashlights, yelling and clapping, as aldo's dad, brother in-law, and mynor carried him down the path and into his house.

i think aldo felt pretty special to come home to such a big welcome.

his parents have been amazing.  in a village where so much abuse and family disfunction is the norm, this family is truly unique.  first off, they haven't asked us for a thing.  secondly, aldo's dad has been working overtime to save money for the things he knew aldo would be needing.

he was able to buy a refrigerator to store the medicine, drinks and cold wraps that aldo needs.  he also had aldo's floor TILED in order to help keep it clean and bacteria free!

the family repainted aldo's room and put a big welcome home sign on the wall.  instead of treating aldo like a burden, they wanted him to feel loved and appreciated.  once aldo made it into his room, his dad's words almost brought us all to tears.  he thanked us for all the support.  he told aldo how special he was, and promised him that he can do anything he wants with his life.

finally, after mynor opened up with an encouragement to aldo and his family, all the rhinos began to share.  i stood amazed as they shared their love for aldo, promises from God's word, and assurances that they would be there for him every step of the way.

i will never forget what aldo's mom told me back when i visited him in the hospital.  she said how thankful she was that aldo had joined the academy right before the accident.  when i asked why, she explained that before aldo became a rhino, he didn't have many friends.  she said "but now he has a big group of friends to help him through this."

aldo lost his right leg and his left arm.  there's no doubt its going to be a long road ahead.

but his mom is right.  aldo is a rhino forever, and he's got a huge group of friends standing beside him all the way.  like it says on our gym wall...  juntos todo es possible