This trip turned out to be much different than I  thought it would be.  Not that there's any expectation of "normal" any more...

Before we came to Guate, we knew Covid had hit the Wilson house.  But they were doing ok. Quarantined and getting through it.  So we came on in, continuing forward with our plans.

First on the agenda was our trip to Quiche, about 6 hours north of BV, where we're looking to plant another academy.  It was a great trip, but when we got back the situation with the Wilsons had gotten worse.

Laura was recovering, but Ryan's health had tanked.  Laura, who is a registered nurse, had been monitoring his oxygen levels - and I could tell she was starting to get concerned.

At one point I texted her and asked "at what point do we need to get him somewhere?"  She replied that she had been thinking the same thing, and told me about his breathing.  He was already to the level where, if stateside, he would have been put on oxygen.

My daughter Brooke started calling hospitals. The first one had no room in its Covid wing. The second one said they had space for one person.  After talking to Laura, within 15 minutes we were packed (in case we'd need to stay overnight) and had Ryan in the car, headed to the city.

But then... Guatemala!  There were protests going on against the President, and all major roads were roadblocked.

We called Dr. Carlos and he confirmed the protests.  We asked for an ambulance.  Surely the protests would let an ambulance through!  But Doc said no - with the magnitude and preparation for protests like this one, they don't even let ambulances through for emergencies.

He said to meet him in San Lucas, that he knew a back road.  About an hour later, we started down a trek that in my 10 years living in Guatemala I had never seen.  It was treacherous and beautiful!  We were moving down a muddy, rain-washed out trail, that winded through lush rain forest.  Thankfully we were in the Wilsons 4-Runner so we never got stuck, although cars were getting stuck around us.

Finally, we made it to a paved road again, and then found our way to the main road to the city, and ultimately to the hospital.  Ryan was exhausted.  He had been bouncing and coughing the whole way.  We got him out of the car and into the ER, where they began to run tests.

They allowed Laura to go in with him, but they made me wait outside.  Occasionally they would let me in to help translate something, or just to help Laura process everything.  But for the most part, I spent the next few hours sitting on a concrete ledge right outside the door.  Dr. Carlos was coming off his own 24hr hospital shift, so he spent that time sleeping in the car.

After 6 attempts to get an IV in, Ryan told Laura, "lets just go home."  He knew that wasn't a good idea.  But he was tired and frustrated.  Laura was steady and sweet... encouraging him the whole time.  After IV fluids, oxygen treatment, and x-rays of his lungs, they finally said he needed to be admitted.  Alone.

Reminder:  Even though this was a nicer hospital by Guatemalan standards, this was no "American suburban hospital."  Sometimes in these scenarios in the foreign mission field, you just feel unsteady for a minute. While the Wilsons have been through some tough stuff in their short time in the field already, she was immediately forced to decide if she was willing to say goodbye to her husband right then, not 100% sure if she'd see him again. 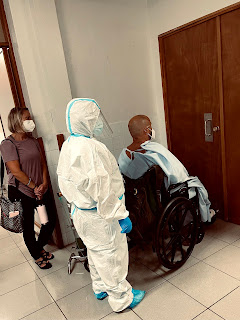 She asked me what I thought.  All I could think to say was: "Laura, God got him here. They had one room. Doc got us through a ridiculous path. We made it.  We're here.  God has him here."

Minutes later, the three of us were staring at the double doors to the Covid wing with a lady in a hazmat suit ready to take him back.  I prayed over him, then she wheeled him back and the double doors closed.  The flurry of a chaotic day was suddenly silent.

We took about two steps and she stopped and said, "actually no, I'm not"... and began crying.  I gave her a big hug, and began saying over and over "God has him" and "He is Sovereign Lord" and "He is worthy of moments like this."

I had no literal, physical assurances to offer her.  I had no idea what was going to happen. After all, the reality was, Laura's sick husband and my sick friend had just gotten wheeled back into the Covid wing of a Guatemalan hospital in the middle of the biggest global pandemic the world has ever known.  Whose to say how that's going to end?

What I did know in that moment is that our Sovereign Lord hadn't lost control of anything.

Whatever the Lord pleases, he does, in heaven and on earth, in the seas and all deeps.  Psalm 135:6

I knew Laura knew that too.  And Ryan.  (Anyone who knows him knows that the "sovereignty of God" is his mantra.)

And seriously - without trust in a sovereign God, how is "comfort" or "peace" even possible in these moments?

After a good cry-hug, Laura told me she was ok.  She later told me that in that moment God's peace completely washed over her.  She said her cry was a deep surrender.  That God's grace was sufficient, and His power was made perfect in her weakness.

Fast forward a week.  Ryan is back home.  He's recovering slowly, but doing well.  I tested positive a few days later.  No symptoms at first, but the last few days have been rough.  Fever, chills, body ache, etc.  I've been isolated in quarantine now for 5 days.

Thankful for Ryan who is such a deep lover of God and His Word.  Such a good husband and dad.  I'm thankful God chose not to take him home just yet.

Thankful for Laura. She is such a rock!  It was special to share that day with her.

Thankful that no one else here has gotten it.

Most of all I am thankful to have been here.  God knew in His wisdom and providence that we'd be here to help navigate the events of that day.

And I'm also thankful to be stuck in this room where I'm writing this.  We were supposed to be home for my dad's 70th birthday party tonight, combined with my son's going away party- for college in Ohio.

But this is where the Lord has me instead.  And He's been faithful to meet me here, in a very personal way.

There's a lot going on right now.  In His mercy He made me do a "force quit" to just be still and know the most important thing there is to know - that He is God.

Wow what an incredible story. Glad everyone is on the mend!